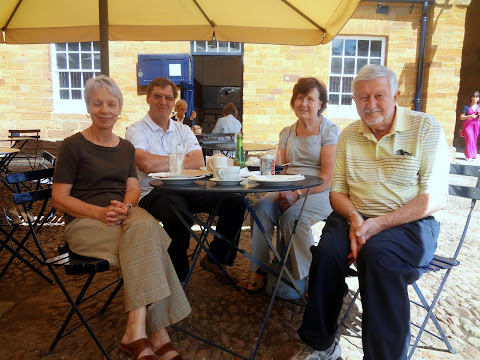 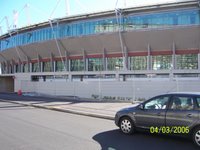 Comments:
Blogstock -- I love that! I really enjoyed reading about the house where you were born. I remember using an outhouse when we visited my grandparents... I thought it was fun, of course Ha! My dad eventually added a bathroom -- it was on half of the porch. It was quite a while before he got the tub hooked up -- my cousin and I took baths in a big galvanized tub set up in the kitchen, water heated on the stove! I have no idea what the grownups did! We went there every summer; it was always fun for this city kid to go to the country! Your post brought back memories! Oh, and that's a handsome group of bloggers... how great that you got together :)

Happy weekend coming to you,
artmusedog and carol

How fun. This reminded me of the blogger cruise we took some years back on Carnival. The thing is huge now. How fun.

Have a fabulous day Jim. ☺

Love the horse photo! It looks like great fun...

Hi Jim, you and Mrs. Jim have way too much fun! I love hearing about your travels and it is always interesting here because there is something new to share and learn. Great captures as well! Have a great weekend and Happy Easter to you and yours!

I have been to Texas and Tennessee - hope you have a wonderful and blessed Easter.

From Woodstock to Blogstock, what a tale that would make. I'm also going gaga over the town's name of Tekamah. If I close my eyes just right, I can imagine a mystery story happening. :-) Let's see, I've been to Tuscon and Tacoma and I drove through the Smokies in Tennessee. Now that was one of the most beautiful drives I've ever taken.
The View from the Top of the Ladder

Enjoyed my visit and learning more about your blogger friends and your family, as well as taking the armchair tour of your trips. Hoping to drive to El Paso with the husband this summer...he's bowling with his team♪

T is also for TRAVEL and you have done a lot of that. ;)

You two are extremely blessed to be able to go to all these places and see all this!