Today we have the cheerleader 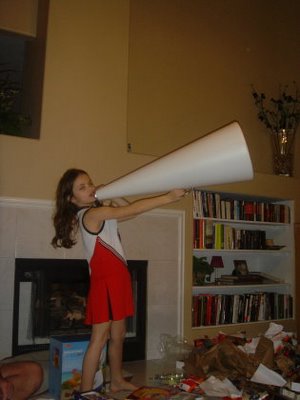 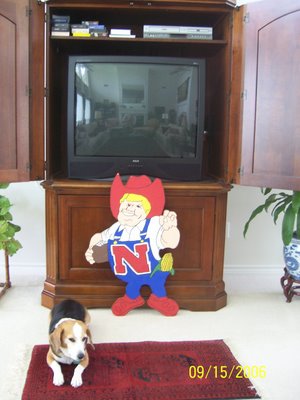 Adi and I aren't going any place this Saturday night. Harry Husker (click here for my previous Harry Husker history post) is already right by the TV.

That TV will be set on Channel 13, ABC. The phones? They'll be turned off. Mrs. Jim is cooking hot dogs and I have the rest.

And we'll all be watching and cheering for this great Nebraska team! 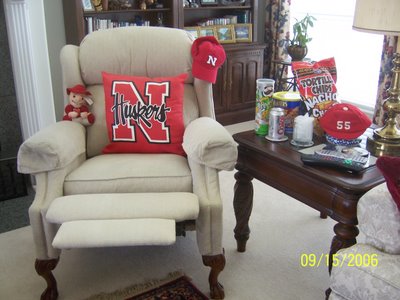 .
That rest is right here in this chair. Right beside the chair is Mrs. Jim's--not shown--chair. Her chair is very likely still dressed in LSU regalia left over from that LSU whipping of Auburn earlier in the day.

1. Wanna' hear the There is No Place Like Nebraska song? Listen here!

Where the girls are the fairest,

The boys are the squarest,

Of any old school that I knew.

Where they're all true blue.

We'll all stick together,

In all kinds of weather,

For Dear old Nebraska U!

2. Or the touchdown version? Listen here!

3. Or hear all the Nebraska Fight Songs at this Site!

4. USC very likely will be on probation this year and may have to miss bowl games. It is alleged that USC Reggie Bush and family has taken over $100,000 in money and 'other' from USC team boosters while he was still playing, becoming Heisman bait and winning the Heisman Trophy for himself. (story link 1) (story link 2) I'm very glad the Houston Texans didn't take him in that first round draft! [I always was glad, I think the Texan management was leery of these kind of things.]

5. A little show and tell. We could have played a name the objects game here. Ask any questions about the things you see if you want. Guess or tell what you see?

Houston, do we have a problem? 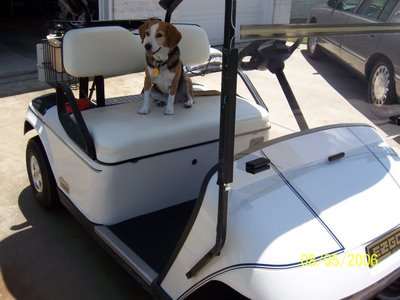 .
Jim is the problem, he wants to do some work on the golf cart before we go riding.
. 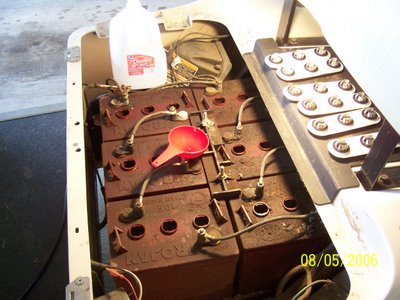 Isn't this a mess? Right away it reminded me of the older song, "I Don't Wanna To Do Your Dirty Work." ** 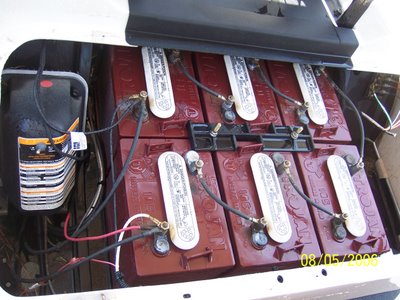 This a lot better. Will it run better now? No, but those batteries are getting old. Five years old. [Note the date, it was July 5, 2006]

Now Adi can go for her ride. We could almost eat off those batteries.

Technical aspects: six each six volt golf/marine batteries in series (with each other, like flashlight batteries) make a 36 volt power pack. When new we could play 36 holes easily on one charge. Maybe 24 holes now (Rachel, 18 holes is one round of golf, or a complete game of golf.) Remember too, it is almost another mile to the pro shop where we start. 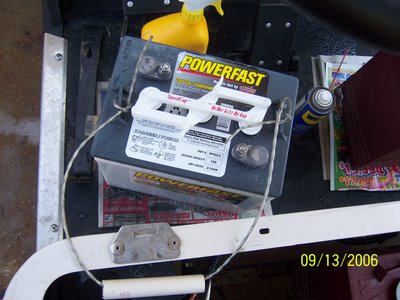 This is my new battery. My friend Dick lent me his hydrometer to find the culprit. Luckily it was just one, for now.

Armed with this knowledge, I called the place where we bought the cart. They would sell us a battery for just $70.74. Much better, and I could pick it up for mere gas money.

As I was walking to Bible study yesterday, Mrs. Jim and friend Marilyn caught me in the parking lot. Marilyn said Sam's had them for $50.00. That saved the day, I would have gotten the seventy dollar one by nine. 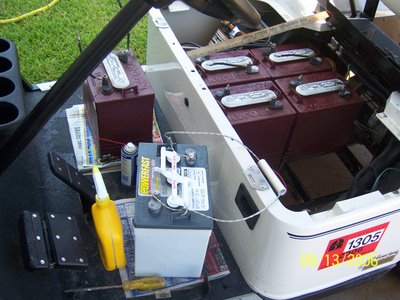 See that wire tie with a handle in the middle. I made that tool to make it easier to pick up the batteries. It ended up I had to take all but one out to clean the carrier free of some corrosion (that white stuff that grows on batteries also grows on the battery holder). 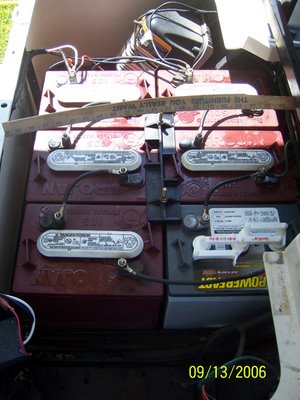 The new battery doesn't blend very good, does it? It should be a better battery, it is made by Interstate Batteries. The OEMs are Trojans.

Adi and I took it for an hour test ride after lunch. It was fairly well charged and seemed to have ample battery for eighteen holes of golf and the commute to and from the club house.

Mrs. Jim will test them on the course Friday.

That was about as exciting as the shower routine I posted about one day (link). I'm sure I bored you if you finished. But aren't you glad to find what happens on the day in the life of a retired fellow.

You're afraid to pay the fee

So you find yourself somebody

Who can do the job for free

When you need a bit of lovin'

Cause your man is out of town

That's the time you get me runnin'

And you know I'll be around

Put the lock upon the door

You have sent the maid home early

In a medieval game

Muslim Immigrant New Citizens The Most Since the 1980s 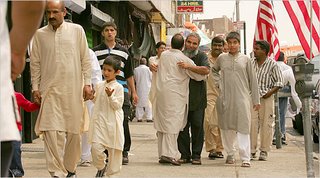 America is the Land of Opportunity!

How often have you heard that said. But the numbers of Muslim immigrants recently--over 40,000 last year--amazed me. As did the number of Muslims admitted to U.S. citenships, more almost 96,000 last year. [Photo courtessy of The New York Times, link here]

Probably not a problem for us, but I'll bet some of them are not being made very welcome. I'll just keep an open mind, I probably deal with a few when I buy gas or get my PC fixed.

I said I was staying away from controversial topics, but this may be an exception.

Rember ". . . look on the fields; for they are white already to harvest?" (My September 10, 2006, blog) These people are a perplexing and challenging harvest to be won for Jesus! 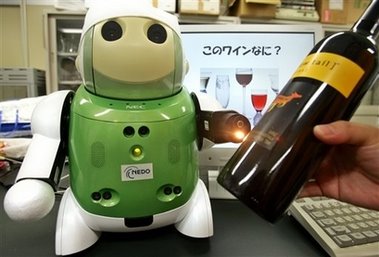 Isn't this a weird sort of September Bug? Only on the Internet! Robots on Yahoo! News Photos: "A 'Winebot,' or a robot that can taste, fires off a beam of infrared light from its left arm to a bottle of Shiraz, and tell the kind of wine during a demonstration at a laboratory in Tsu, central Japan, Tuesday, Aug. 22, 2006. Some of the light is absorbed and the light that returns is then analyzed in real time to determine the object's chemical content. Researchers at NEC System Technologies and Mie University have designed the robot, a mechanical sommelier, that is able to identify dozens of different kinds of wine, cheeses and hors d'oeuvres. (AP Photo/Shizuo Kambayashi) " Robots HNT Food+and+Drink Life More, a full length article, at Yahoo News (link here) p.s. I have missed August Bug. It may still be coming!

This noon Mrs. Jim is being honored to say the prayer before the monthly luncheon of the Bentwater Ladies Organization.

She will offer this prayer:

We thank you for this beautiful day and for the opportunity to be together with our friends and neighbors.

As we are reminded of the terrorist attacks of 9/11, we pray for our nation still hurting from these events. We pray for those saddened from the loss of loved ones. And, for the first responders and victims who are still physically ill from the results of this catastrophic evil event.

Thank you for those in our nation’s intelligence service and for our military who continue to fight terrorism around the world. Give them wisdom and alertness for their safety as well as comfort in having to be away from their families.

We know Father that you have overcome evil and that you provide us peace among the perils of tragedies as well as in our everyday lives when we trust in You. It is your peace we need to be seeking. Because of who You are, you have also made us overcomers. Not just for our well being but so we can help others – To provide them kindness, and encouragement, as well as to provide for their physical needs and spiritual insights.

Thank you for this food and for the dedication and sweet spirit of those who have prepared and serve it. We appreciate them.

These things we pray in your Holy Name.
Amen

Thank you, Mrs. Jim. May it be my prayer as well.

The events and where I was:


3. April 4, 1968--Dr Martin Luther King assassination?
I remember that day, but haven't the foggiest idea what I was doing.

You may have other newsworthy dates that you remember, these are all I can handle for right now.

. . . look on the fields; for they are white already to harvest. 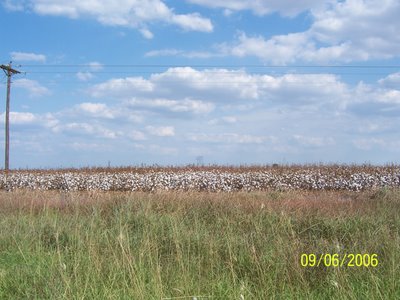 .
34 Jesus saith unto them, My meat is to do the will of him that sent me, and to finish his work.
35 Say not ye, There are yet four months, and then cometh harvest? behold, I say unto you, Lift up your eyes, and look on the fields; for they are white already to harvest.
36 And he that reapeth receiveth wages, and gathereth fruit unto life eternal: that both he that soweth and he that reapeth may rejoice together.
37 And herein is that saying true, One soweth, and another reapeth.
38 I sent you to reap that whereon ye bestowed no labour: other men laboured, and ye are entered into their labours. [John 4 (King James Version)]
. 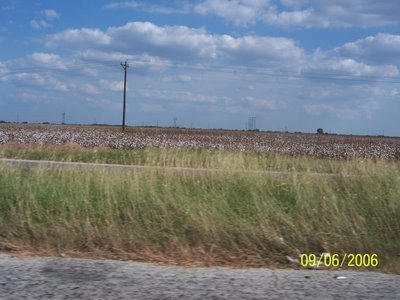 .
This field had been defoliated. On our way to Corpus Christi last Wednesday, the planes were flying low and busy. One even went under a low power line. ["Planes and helicopters are used to seed rice and wheat, defoliate cotton prior to harvest. . ." National Agricultural Aviation Assosiation, History (link)].

Want to read the history of crop dusting? Go to the link, its fairly short but I learned a lot. I'm sure Cliff Morrow knows all about this. Heck, he could even get a summer job down here defoliating cotton with his dare-devil sprayer plane.
.
We saw a lot of cotton fields, some were still green and white waiting for (these), others as pictured above, some being picked and compressed. Now they compress and bale right out in the fields with a huge machine. Religion Life Farmers cotton Texas agriculture
They used to haul it in with wagons to a compressing plant (picture)(picture1)(picture2)(description). I was gone before it was decided that I needed a picture of the modern behemoth (picture). [Vintage Postcards, Cotton]