A little antiquing going on

Last Saturday our Montgomery Early Ford V-8 Club had a road trip to Cold Spring, Texas. We all got there early so a little antique shopping was in order.
. 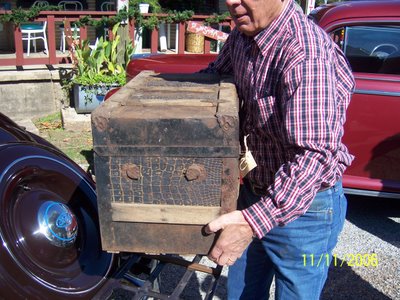 You would think the women would like this a lot, but friend John made the only purchase. This old trunk for the package rack on his 1936 Ford Roadster had a price tag of $85.00; John haggled them down to $70.00.

I went with brother-in-law, Royce, in Mom's 1974 Ford Mustang II. Mrs. Jim and my sister-in-law were helping with Mema so they didn't go. We ate [Texas] chicken fried steak and the trimings--the Jim Bunch eats again--then we headed back to the hospital.
. 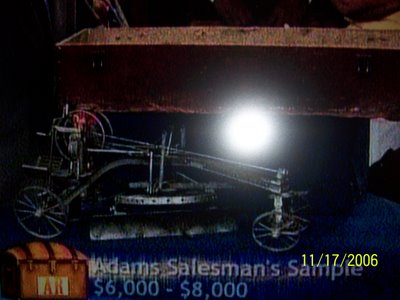 This road grader saleman's model road grader wasn't in any of the stores. I saw it on the Antiques Road Show last night. It was appraised at between $6,000 and $8,000 as it was in very fine shape. The sample case sure was worn.

The grader caught my attention because Dad had the real thing on his farm. At first it was horse(s) drawn but latter he modified it so it could be pulled behind his tractor. It would clear the lane of a medium snow and grade the spring ruts out too.

Probably it paid for itself as Dad would help Grandpa on his road contracts. Grandpa had a couple of side businesses besides his farming. One was doing road work and keeping the ditches mowed. Antique travel+and+places travel Jim+Bunch+eats Jim+Bunch Antique+Cars Cars hobbies Friends Ford Life Texas
Grandpa's other pursuit was breeding horses. He always had at least one stud horse that was in much demand. The day my sister was born Grandpa and I went on a stud horse mission.

I don't know at all how many farms we visited then but it was fun just going around with Grandpa. I like to think I was his favorite grandson.

Lois may e-mail me the sale information for Dad's road grader. I'm thinking it probably didn't bring one fifth the value of this model.

2. A detailed description of Cold Spring, Texas (link); or really detailed here with maps, graphs, and travel and demographic info

I just took this quiz,

Why don't you try it?
.
. Fun Humor places Life travel+and+places Games Quiz Fun,+Fun,+Fun,+When+Daddy+Took+the+TBird+Away Accent
I don't believe mine, it should be a mixture between Midwest and Southern! 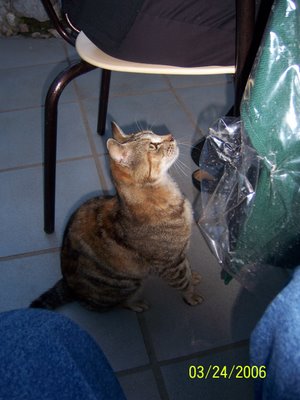 Ain't she cute?
[Click on this wild kitty from
Sicily, Italy, for full screen.
Here she's begging for food.]
.
..
More on the Galveston cat killer
[My previous article about Jim Stevenson was
November 13(link) after the middle of the page.]
Accused cat killer says he likes the animals Chron.com - Houston Chronicle, Nov. 16, 2006, (link): GALVESTON —

"It has come across in articles that I hate cats and that's just not true," Stevenson said in an interview at his home today. "I actually like cats in the house. I have friends I visit and I play with their cats in my lap."

Ornithologist Jim Stevenson won't say how many feral cats he has shot since he moved to Galveston a decade ago but acknowledges "it's a lot fewer than the number of birds I've saved. cat+killer Animals Birds News Crime Pets+and+Animals Cats travel+and+places travel Photos
Stevenson, 53, is charged with animal cruelty in the shooting death of a cat near the San Luis Pass Bridge at the far west end of Galveston Island on Nov. 8."
# posted by Jim : 11/16/2006 11:48:00 PM  3 comments

Ever wonder where your poinsettia came from? 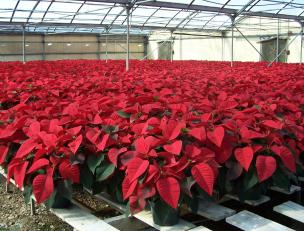 .
"Poinsettias fill Ellison's greenhouses each fall."
[Houston Chronicle picture courtessy of] Ellison's Greenhouses
A lot of poinsettias, Jim and Ellen Ellison plan to finish out 80,000 poinsettias this season.
. .
Holiday cheer grows in Brenham greenhouses Chron.com - (link)Houston Chronicle, Nov. 15, 2006, 5:35AM:
.
"Ellison's splashiest poinsettias must be its Texas-size giants. Reaching 7 or 8 feet tall, each is made from about 22 poinsettias encouraged to grow straight up."
.poinsettias Christmas
Update: Mema is back in the hospital. She may get out again tomorrow to go over to Park Manor, a nursing home.
.
Almost didn't get blogged today, running real late because of hospital things.
# posted by Jim : 11/15/2006 09:59:00 PM  9 comments

Try this video on for size.

http://www.mojoflix.com/Video/Best-Friends.html
.
Did you know?
Texas is the only state that is allowed to fly its state flag at the same height as the U.S. flag. The population of the world can live within the state boundaries of Texas. [Courtesy of GEICO (link)] Texas Flag Animals Animal+Video Links Pets+and+Animals Life Friends Humor
Daughter, Susie, sent me that link about the cat and bird.

When you get a lemon, 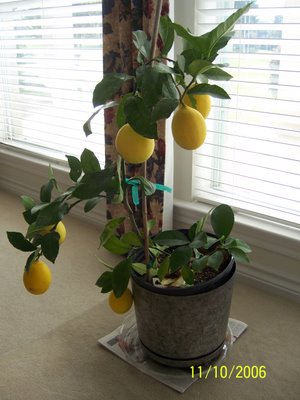 I brought them in before the birds got them. Do birds like lemons?

Birds and cats do not get along. One enterprising Gavlveston birder is illegally helping the bird side of the tussle.

"GALVESTON — A well-known birder and founder of the Galveston Ornithological Society has been charged with animal cruelty, accused of shooting a stray cat with a .22-caliber rifle."
By KEVIN MORAN,
Copyright 2006 Houston Chronicle (link)

In his birdwatcher's newsletter, the jailed wildlife author and photographer, ornithologist Jim Stevenson, said ""And I'm sorry if this offends, but I sighted in my .22 rifle and killed about two dozen cats in about the first year," the passionate birdwatcher and professional birding guide wrote. "When we allow feral cats to roam free, . . . "" (second link) 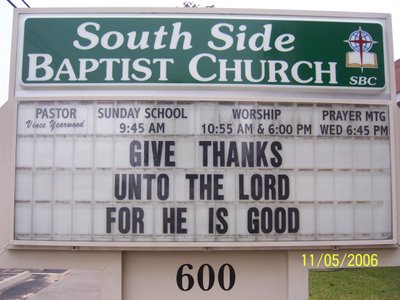 .
Mema and I saw this sign in Conroe on our way to church last Sunday. Although she is still in the hospital, she is feeling a whole lot better now.
.

33 Then the trees of the forest will sing,
they will sing for joy before the LORD,
for he comes to judge the earth.

34 Give thanks to the LORD, for he is good;
his love endures forever.

35 Cry out, "Save us, O God our Savior;
gather us and deliver us from the nations,
that we may give thanks to your holy name,
that we may glory in your praise."