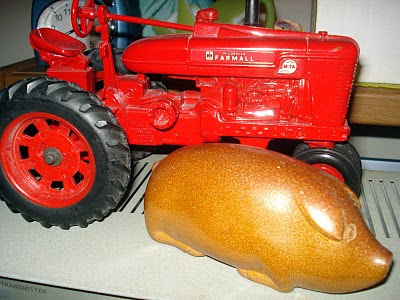 Dr. Scott, our veterinary doctor, gave me this pig when I was pretty small. I never played with it and it was always parked along with Mom's knickknacks.

The tractor, a toy Farmal MTA tractor, belonged to Dad. Dad also had the real thing which came out around 1960. My Uncle Howard restored it even though it didn't need much.

Too bad you can't see the pig's snout. When I still didn't know better I poked a pin inside one nostril. Then I couldn't get it back out. Nobody ever asked me about that pin. Oh yes, I never did name that pig. Most of my toys weren't named. Neither are my cars of today.

I have seen a few other pigs like it. Dr. Scott may have handed those out too. It is heavy and might be solid porcelain. I feel it would break in half and shatter a little if it were dropped on the cement floor.

All about our early play time is what Linda wants from us this week. Linda asked several questions about the toys we played with. Click her icon, right, if you want to read others or participate in this. I found that Nel and I each had an eight ball that knew answers to questions.
.
This morning Linda has written of many of her childhood toys you might identify with. We both had blocks that our dads had sawed out of lumber. I had some hand-me-down painted with numbers and letters blocks to mix with the homemade ones..
First,
a little teacher joke from my friend, bornagn901 (I never know whether that will be James or Gwen--the address belongs to James but they both use it when it comes pass-around-joke time):

TEACHER: Maria, go to the map and find North America .
MARIA: Here it is.
TEACHER: Correct. Now class, who discovered America ?
CLASS: Maria.
Now, to what Linda asked us to answer: 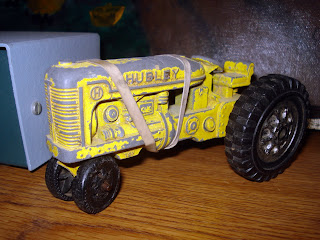 What toys do you remember from your childhood?
Most of my toys were farm type toys or cars. I did have a pocket knife fairly early in life and also some games. They games are for next week if I don't play hooky.
.
I also had a "wheel." It was made of iron with iron spokes. I think it was off an old wheel barrow. I would push it with a stick and run all over the farm yard with it ahead of me.
My first and only tractor,
an old Hubbley (on the right)
Like most farm kids I had a Red Ryder BB gun when I was fairly young. I got to be a really good shot with that.

What did you like to do to entertain yourself?
I spent a lot of time down by our creek. There was a little water most times but not enough to drown me. To me it was very pretty, the banks were lined with large old trees.
.
I don't think I took toys down there, I would just 'play' and dream I guess. It was a place to 'get away.' To this day I like to get away. My sister, Lois, may comment to tell us how she learned NOT TO SMOKE down by the creek.

Did you mostly play inside or outside?
Of course in the cold Nebraska winters I spent more time inside than outside. During the summer I would hardly ever come inside. When my sister was old enough to help we built us a nice tree house out in the grove. That was Lois' idea but it was fun.

Did you ride a bike all over the neighborhood?
This would be a silly question for me. I only rode on the farm and in our lane to the main road. If I was not supposed to go visiting I can't remember ever being told no. Mostly I just didn't. Besides there weren't kids around my age. No one came to play with me either unless they came with their parents.
.
I remember the Morrows with kids would come to visit. Also the Hales and Stevens would come. The latter's kids of my age were girls so our play was a little different that I was used to. Cliff Morrow is a blogging buddy who left my first comment. He was just a baby when the Morrows came.
Play baseball in the backyard? Basketball in the driveway?
I don't think I knew what a basket ball was until the 11th grade. That was when I went to town school. We did play baseball and football at recess time. There weren't enough kids around the homes for these games. When the Morrows came we had enough for baseball with the dads playing.
.
In grade school the teacher would organize a game of work up baseball. That way everyone got to play every position. I learned football in the ninth grade for recess. That was at the country two-year high school. The other kids all new how to play when they came.

I did have a baseball, a bat, a glove, and a football. I kicked the football around on the farm mostly during fall. I was a pretty good kicker. And I still have the base ball someplace in our house.

If you had siblings, was there a distinction between your toys and theirs?
Lois had 'girl toys' like dolls and tea sets and a doll house. I had, like I said above, boy toys which were farm and road machinery and cars and trucks.

Neither of us had very many toys but more than a lot did, I am sure. We shared our bicycle which was a girls 26 inch (link). We also share the games with each other and with Mom and Dad.

Did you "inherit" any toys from older siblings?
I was the older of us two children. Lois is five years younger than I am.

My grandpa H did 'give' me one of my cousin's toys. He thought the cousin was being selfish. That was my favorite toy, a 1920's yellow and black taxi cab. The cousin had two of them that he had been given by our dads' aunt in Omaha.

.
Grandpa thought the cousin was being selfish playing with both of them and not sharing. The gift was to teach him a lesson. Of course I have always been easy and this early time was no exception.

I left the tractor out one night and the next morning Dad ran over it with his tractor. It broke into too many pieces to ever be put back together. Almost as sad as Humpty Dumpty.

What were the "fad" or "must-have" toys of your generation? Did you parents buy them?
If there were fad toys back then we didn't get the word. I think the fads are mostly made important by TV commercials.

Was there a toy you always wanted and never got to have?
Yes, I always wanted an electric train. I did have a small battery operated train during the War. Very likely they stopped making them or I might have had one. But knowing the cost, it was likely when they were available that this was still all I would have.

I would read the Sears and Ward's catalogs and drool over the trains. One thing I remember doing was to 'protect' for as long as I could those pages that were from the older catalogs that were in the outhouse. 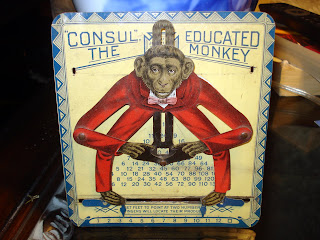 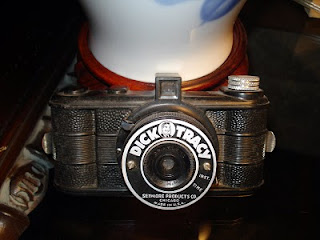 On the right above is my smart monkey, Consul the Educated Monkey. Consul taught me my multiplication table. He knew everything up to twelve times twelve. Our class only did it to nine times nine. That may be why I was so good at math. I do have a math minor for my B.S. to keep.

He was operated by putting his big toe on the numbers to be multiplied by each other. The slate he holds would show the correct answer. He was never wrong. There is a piece missing about shoulder high that is supposed to keep Consul from flopping over frontward.

To the left is my Dick Tracy camera. I took a lot of pictures with that camera. They were very small from 127 film. I saved birthday money and my 25 cents a week allowance for this toy I am sure.

I must have had an account, cash, at the Merchandise Mart in Chicago. There I bought the camera and also a telescope. The telescope was pretty flimsy being made of rolled card board like the dah tah dah inside the toilet paper rolls today. The scope is now in our attic I think. 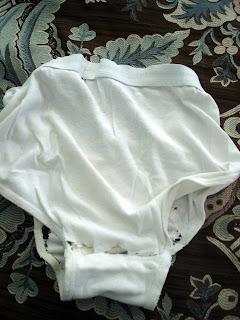 Six day underwear relived (link). It was an old post about a Japanese wannabe invention that made the Wall Street Journal.

That was back in the 80's I think but I have lost my clipping. Basically, it is underwear with three leg holes. You can go to that blog to read more (link--same as above).

My almost ready to recycle underwear at right has
quite a few holes but only two are leg holes. 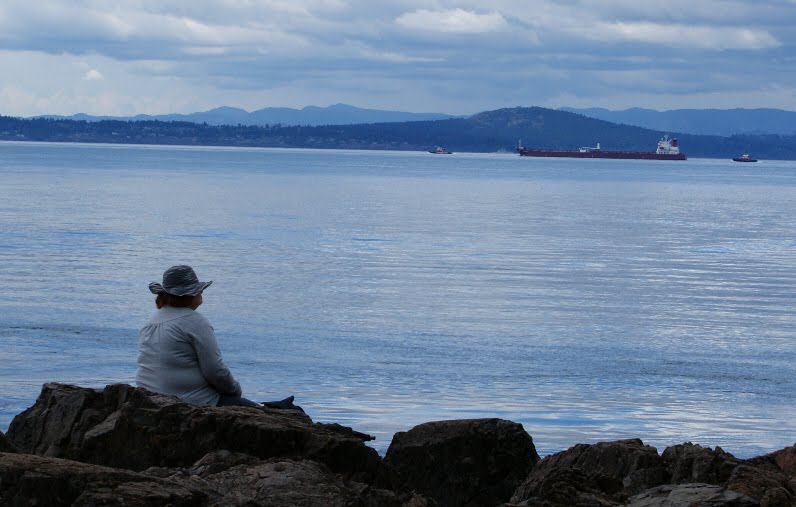 By the sea she went, dreaming of home. Wishing to be there. Far, far away.

She cannot. Her kids want her near.

She loves them still.