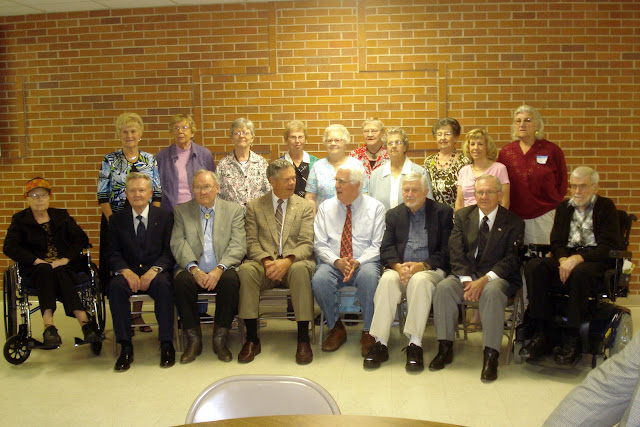 [Click on picture to enlarge. Click agan for super sizing.]
We had our class reunion on May 26, 2011. Our school was Tekamah High School of Tekamah, Nebraska. We had our BIGGIE ten years ago for the fifty. Only three of us had died then. After the picture taking all the graduates and family had a nice dinner in the city auditorium.

There were two more in the morning. Rhoda and her friend (I can't remember names) came to the luncheon but they had to leave in the afternoon. When I came over to Rhoda's table they all smiled and chuckled a little bit. Rhoda told me that they had been talking and had decided that I (Jim H.) was one of the deceased. We all chuckled some more.

Decorah Eagles (live video link, click here) post dated
The eagles have left their nest
this is an earlier post -- the camera is still current
(June 21 update)
check out their activities from the links you find 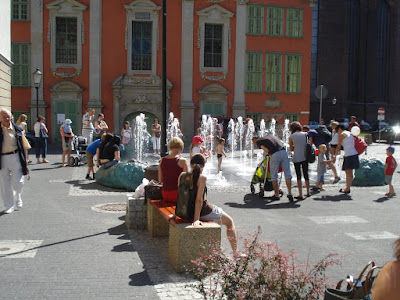 I won't be going. It does sound like fun. Perhaps this World's Largest Sprinkler might visit your town.

If it doesn't don't worry, just remember that

EVERYTHING IS
BIGGER IN TEXAS!!

I will post a picture IF we do go.

This much smaller sprinkler is pleasing the kids in Gdańsk, Poland (link). We were there last Summer, 2010 for a very nice day in this historic old city. I would recommend that you go there if you take a Baltic cruise. 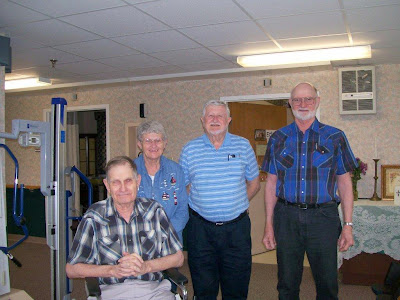 This summer in our trip to Nebraska and Iowa we wanted to attend my high school (Tekamah, Nebraska) and to visit three 'local' cousins. When we got there we called all the cousins. They were home so we would visit them on the next day, Friday.

Our first visit was with our cousin, John. John is now living in the local nursing home. He was doing really good compared to the last time we visited. While there his brother, our cousin Jack, also visited. 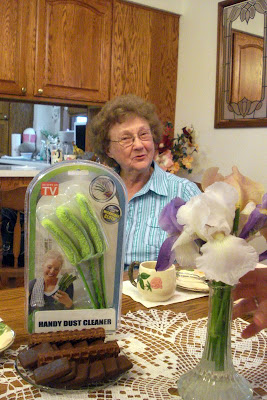 My sister was already with us, she came over from Iowa to accompany us with the cousin visit.

Left to right above we have John, Lois, me (Jim), and Jack.

Next after lunch (link), we (Lois, BIL Jim W, Mrs. Jim, and I) drove to the country out west of Herman, Nebraska, to visit our cousin, Jean and her husband, Dwain. The live on a farm and still operate it and several others with the help of their son.

At right you see Jean. She was telling us the story of how she came to own this "HANDY DUST CLEANER, as seen on TV." I don't think very good directions came with it but we all had some suggestions as to what to do with it how to use it. My suggestion was to 're-gift it.'

As usual, Jean had coffee, tea, and some very nice baked items for us. Before we left we had a very nice strawberry dessert. She always does does that. In the South we call that Southern hospitality. It was almost dark when we left. We were traveling with two dogs, Adi and Katrin, and they had come along with us that day. Lois and Jim W. went on to their home in Iowa as they would not be attending the high school reunion on Saturday.

Our day Saturday started our again with another visit with John. We were pleasantly surprised when my cousin, Don and his wife, Phil, showed up from Missouri. They were classmates in school up at Craig, Nebraska, and had come for their reunion.

Left to right is Don,me, and John. Before lunch we all left John to do reunion activities with our ex-classmates. It was unusual perhaps, but all us cousins were wearing blue so that made it perfect for today's post.

Our cousin visits were wonderful. Three were missing, Ione (Garfield Arkansas), Bud (Longmont Colorado), and Dick (Beatrice, Nebraska). All of us except for Jean and Dwain are fairly well retired.


These were our fathers and grandparents. 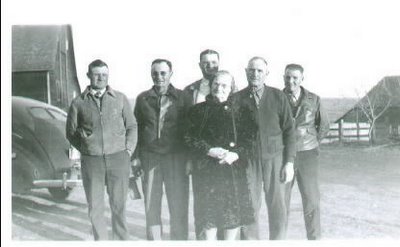 after their first flight last Saturday!

Empty-nest syndrome: Eaglets are leaving; camera to shut down TheGazette
by Orlan Love

With the world-famous adolescent eagles spreading and testing their wings, the Decorah bald eagle cam will soon shut down.

The three chicks hatched in early April have left the nest, leaving little of interest to the fans who have logged more than 160 million Internet views this spring, said Bob Anderson, director of the sponsoring Raptor Resource Project.

The most precocious of the three eaglets took flight Saturday and later returned to the nest “as if it had been on the wing for weeks,” said Anderson, 60, of rural Decorah.

Since the three chicks hatched within six days of each other, Anderson believes they all will have made their maiden flights by the weekend. With the nest sitting empty much of the time, Anderson said, wall posting on the nest’s Facebook page will be shut down Friday, with the cameras likely turned off by the end of the week.

“It has been the most viewed live cam in the history of the Internet,” said Ruby Tugade, content and distribution manager for San Francisco-based Ustream, the website that hosts the live video stream.

Anderson said Ustream had spent a fortune for the bandwidth required to have more than 150,000 viewers at once.

Tugade declined to comment on the cost, but said, “It was a gift to everyone.”

Anderson said he is proud that the nest cam has taught so many so much about the wonders of nature.

“I think it is probably the largest wildlife education program ever on the planet Earth,” Anderson said.

Anderson, who has been tied to the nest via email and cellphone when not actually running the cameras, said he is looking forward to an “unplugged party” in the near future.

Next year, he said, they’ll have more and better cameras and faster uploads — plus, “live video and audio from a red-tail hawk nest and (very probably) a peregrine falcon nest.”

Ah ha! I've found a gnat hair with fingerprints of an Irishman!

Now, now dear Watson. Don't you be fabricating evidence for this case.

Written for Succinctly Yours – Week 13
The 'fabricate' prompt word and the picture were selected by Grandma.
It's posted on her blog, Grandma's Goulash