.
my Six Words:
How to separate white from yolk.
.
It is fairly easy, watch this:
.
http://bbs.wenxuecity.com/cooking/1160651.html
.
Found by Chatty Crone, thanks Chatty
(For funsies do your translate button)
. 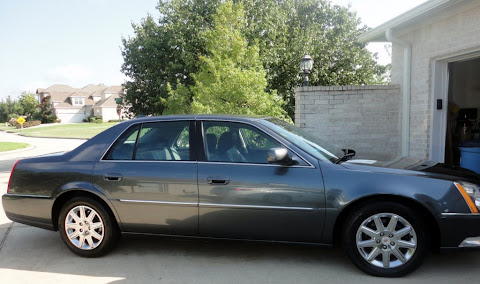 .
This is our new-to-us car.  It is a 2011 Cadillac DTS.  2011 was the last year for this one.  It will replace the one Karen is driving in the picture on the center below.  Our rear-ended car (link to previous blog), a 2006 Cadillac DTS, was declared a total loss by the insurance company.
.. 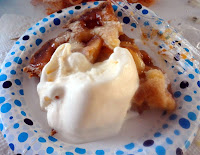 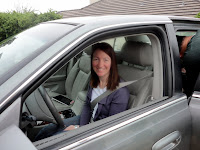 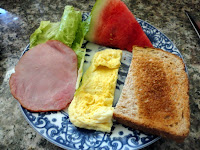 .
The apple pie and ice cream picture has nothing to do with eggs.  I just like this dish better than eggs.  My eggs are mostly scrambled as in the picture on the right of a healthy breakfast I had made earlier this year.  But now it will be easier to eliminate some of the egg yolk using the plastic bottle method.
.
One thing about Mrs. Jim's and my cars is that during our 39 years of marriage we have never had a brand new car.  While I worked for Ford I would buy one year old cars that were turned in by executives who had a car as a part of their salary.  Grandma's 1974 Mustang II Ghia (picture) that we now have was one of those.
.
During our time together some of the cars were not real winners anymore because we keep them for a long time.  One, a 1976 Plymouth Volarie station wagon, was so rusty that Mrs. Jim was afraid she would fall through the floorboard.  Another, a 1981 Oldsmobile Cutlass, we had to keep duck tape covering a big rust hole on its side.
.
Remember we are both retired from education which does not pay huge salaries and used cars were one of the ways we were able to live and raise family on that pay.  Now with the fixed income of retirement that has no cost of living raises that is necessary yet.
...
Mac and Cheese without the cheese

Describe your life (or something) in a phrase using just six words for Six Word Saturday. Click the box at right to visit Cate's blog with Mr. Linky showing all the other blogs participating this week. Cate is the boss at Six Word Saturday. She would like for you to participate 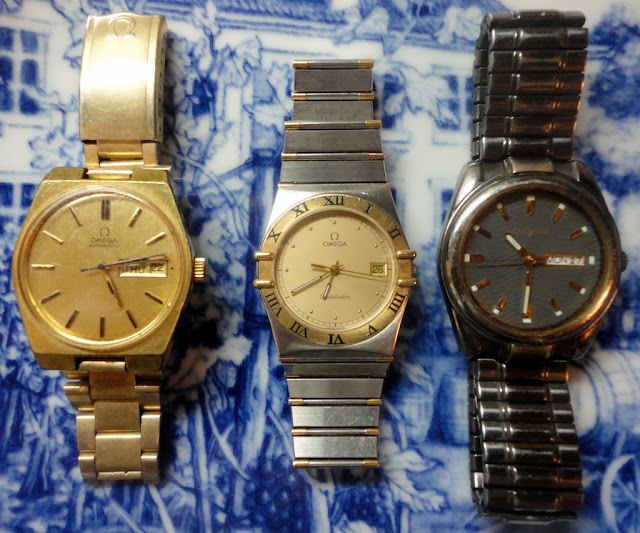 nnnnnnnnnnnnnnnnnnnnnn.
"O" is for Omega.  Right away I think of God being the Alpha and the Omega, who was, is, and will be (forever until the end).*
.
But today, I am thinking of Omega watches.  The two on the left are Omega's, the one on the right is an Elgin.  They all have a history.
.
The first, on the left, is the oldest.  It is a 1970's version of the Omega Constellation that Mrs. Jim gave me when we first were married.  It was for an occasion but I do not remember it.  This watch is self winding.
.
The middle one Mrs. Jim also gave to me, this time for Christmas back in the 1980's when our daughter-in-law worked for Dillards.  She spotted it in an Estate sale lot and suggested to Mrs. Jim that I needed a new watch.  It is also an Omega Constellation but a newer model and has a Swiss battery operated crystal controlled movement.
.
The watch on the right is an Elgin that Mrs. Jim and I gave to Dad for his Christmas.  He was legally blind and could hardly see the numbers on his watch to tell the time of day.  We though this one might be easier.  He was very proud of it and until he died he wore both his old watch and this new one on his arm.  It also has a Swiss controlled battery operated crystal controlled movement.
.
I was glad it was an Elgin as I had worked at the Elgin watch factory in Lincoln, Nebraska, before I got drafted into the Army.  When I left my work group gave me a nice (wind up version) Elgin which I wore while in the service.
.
There is another watch that I still have, a retirement gift from my work group at the college.  It is a Seiko with the school crest on the face.  It also runs on batteries.  Only one problem with that watch, it is misplaced and I haven't seen it for several years.
..
When and if I ever get a new one it will be a light charged battery powered crystal controlled watch.  They are advertised as battery-less but there this small battery that will hold a charge for a few days.
.

— The picture of my three watches poised on the saucer is posted here especially for Pat's Things in a Row.  BTW, the plate is one from Mrs. Jim's Spode collection.
— I posted for Alphabe-Thursday 'O' assignments with Miss Jenny at the head of the class. You can find her by clicking here.
— Thursday Two Questions are next.  (See Thursday Two Questions by Self Sagacity for more reading of other's two questions for this week. You could also make your own by checking in at this link.)
...t
—I really enjoyed your responses to my ice cream pictures last week. My Two Questions for this week (you can answer just one if you wish):
..
1. What is your favorite Watch like?
.
All three of the ones shown are my favorites because they have special meaning to me.  There are a couple of Pocket Watches that I also like.
.
One was my Grandpa's watch that he hocked in Arkansas so he would have money to get back home to Nebraska.  The other was given to me from a friend.  It was her deceased husband's and she left it to me in her will. Both of these have gold cases
.

2. Do you have some retirement or departure presents that are special?
.

Mrs. Jim's work group gave her a rocking chair when she retired.  It has her school's crest and Mrs. Jim's name embossed on the upper part of the chair back.
.pe
Bonus Question: What would be your favorite "O" word?
.

One last mention here.  I got hopelessly behind on returning your comments last week and doubt if ever I will get caught up.  The accident and the car have been very demanding.
.
The car is totaled (please read last week's post if you didn't get to see a picture of it) and tomorrow we will go into Houston to look at a couple of possible replacements for it.
.
*Note:   ""I am the Alpha and the Omega," says the Lord God, "who is, and who was, and who is to come, the Almighty."" Revelation 1:8 NIV 1984.


He thought he was ready to go without it.

He missed on the third round of trivia.

140 Characters and spell checked by MicroSoft Word
µ-fiction Story Copyright
© 2012 Jimmiehov
All Rights Reserved
.
- - - - - -.
.
°Grandma of Succinctly Yours Week 75 gives these directions:
°Use the photo as inspiration for a story of 140 characters OR 140 words or less.
°Word of the Week, 'omniscient', and picture prompt were furnished by Grandma.