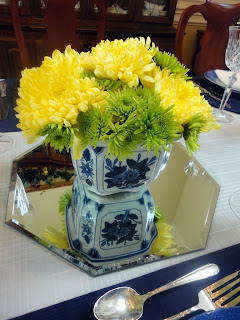 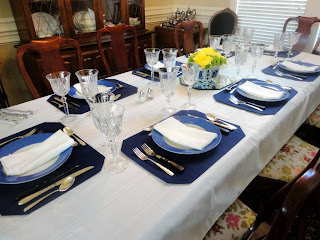 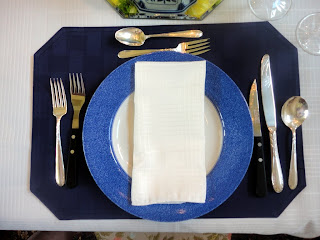 On the right, homemade empanada with bean salsa for appetizer
.. 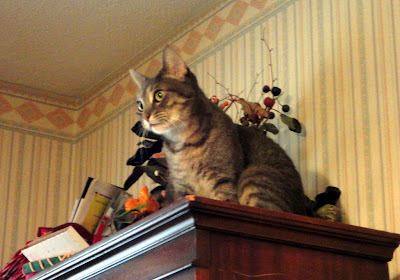 [click on any picture for large sized]
"P" is for Pussy Cat for my first Alphabe- Thursday "P" word.  This cat belongs to my BIL, Danny, and SIL, Winetta.  She is watching Adi, our beagle dog, with a wary eye.  I doubt she has ever been close to a dog before. 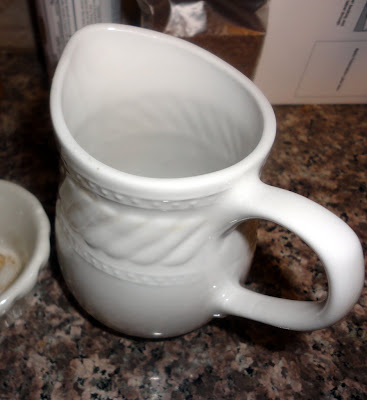 "P" is for pitcher.  This pitcher, a creamer, is nondescript in that it is just plain white and comes from an inexpensive china set.  It might be interesting that when company comes for dining we often serve with this sort of plain ware instead of some of the more expensive and pretty china that Mrs. Jim has.
Why would we do that?  These dishes are safe for the dishwasher while many of the others are not.  But these pretty dishes are displayed very nicely in our glass-fronted china cabinet. 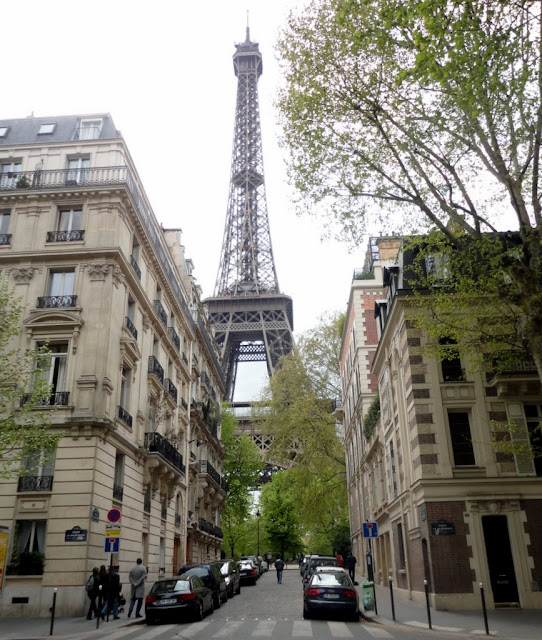 "P" is for Paris.  We love to visit Paris.  This is the street leading from our last hotel.  I would like to stay there for a couple or three years.  Just to soak up the ambiance and enjoy.  Contrary to a lot you hear, the French are a very friendly people, at least to us.  Mrs. Jim speaking some French and having French roots helps some here, I am sure.  Her family lives in the Bordeaux area. 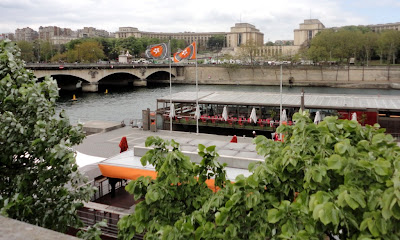 "P" is for Paris.  I love to walk along the River Seine in Paris.  The river meanders back and forth through the city and you never really know where you might find it during your walk.
Most areas have a walkway beside the river.  Following the river is not really a fast way to get to where you want to go as it changes its down stream direction a lot.  But if you are in no hurry and don't really care where you will end up, just follow it. 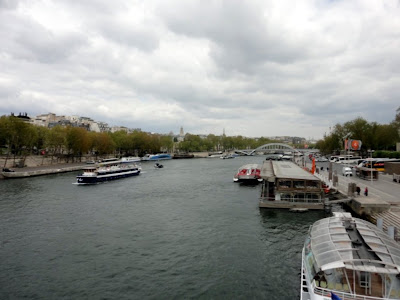 "P" is for Paris.  Many of these boats take passengers, mostly tourists.  A land taxi is in order if you want to go some place.  But for for tourists they are great to get the flavor of Paris with all the river's windings.
Besides taking a river tour, you can also eat on the boat.  We haven't done that, but it is quite a nice romantic ride in the evening.  Just don't drink too much wine and fall into the water. 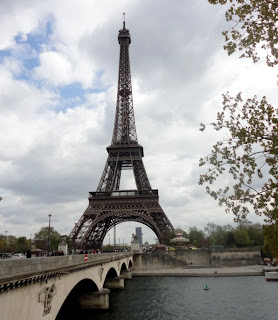 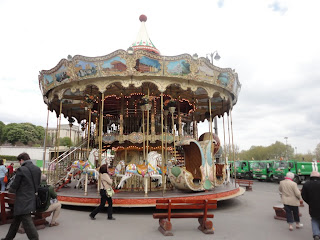 "P" is for Paris. Every now and then on your river walk you will catch glimpses of the Eiffel Tower.  The river goes right by to the tower at one point.  Another point of interest is the Pont de l'Alma (Alma Bridge in English).  It is a scenic bridge, but more interesting is that it is near the Pont de l'Alma tunnel where Diana, Princess of Wales died in a car accident along with her companion Dodi Fayed and driver Henri Paul back in August 1997 (Wikipedia).
The Flame of Liberty at the bridge's north end has become an unofficial memorial to Diana.  There are always flowers laid at the foot of the monument there in Diana's memory.  You can do that too if you want. 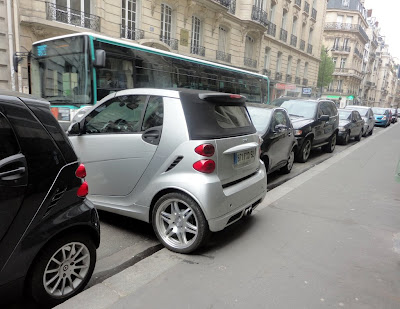 "P" is for Paris.  Paris is a crowded city, with a population of around 10 million (NYC, USA, has about twice that many).  If you are driving, I would recommend a navigator.  Mrs. Jim is the best navigator in the world so we do very fine driving around in Paris.  We don't drive there a lot because of our lack of familiarity with the city.
— I posted the above for Alphabe-Thursday 'P' assignments with Miss Jenny at the head of the class. You can find her by clicking right here.
—My post is also for Pat's  Thursday Things in a Row.  Some of the Paris pictures here are suitable, the river scenes with the boats and the cars on the streets, especially this last one with the cars parked pretty close together along the street.  For sure this Smart Car driver won't have any problem leaving his place.  He might have a parking ticket though when he gets back to his car.  The offense?  Probably parking on the sidewalk.
—Here next is my Thursday Two Questions post:
...t
I really enjoyed your responses to my watch pictures last week. My Two Questions for this week (you can answer just one if you wish):
..
1. Have you ever been to Paris?  If your answer was yes, what special place of interest did you like to see or do?  If it was no, then what might you like to do do when and if you could go?
.
As you saw in my post, walking around is the best.  Almost as good is visiting the various museums.  My favorite is the Musée d'Orsay, the building for which is a converted train station, Gare d'Orsay.  I like because of all of the masters on exhibition there.  Van Gogh will be my favorite in this museum.
.
2. What city is most special for you to visit?
.
I have a hard time with this.  London, and Paris and New York City in that order are probably my favorite large cities to visit.   Mostly because there is a lot to do in those cities within walking distance of 'down town.'
.
Bonus Question: What would be your favorite "P" word?
.
Pickles would be a good choice for my blog.  One time at the checkout counter belt of our Kroger store, I dropped and broke a large jar of Sliced Hamburger Dills.  The store was nice and cleaned up the mess for me.  And they did not follow the rule, "you broke it, you pay for it' of many stores. 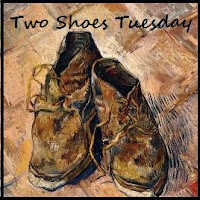 Two Shoes Tuesday information:
Josie is the boss and so please read her introduction and first set of instructions:
"Here it is... our first official round of Two Shoes Tuesday... a place to share what we enjoy doing most... writing! Each week I'll provide a one-word writing prompt and ask you to share a short story, poem, essay, thought, or photo relating to that topic. (I'll post the writing prompt for the coming week on Saturdays to give you time to work on your post.)
Today's writing prompt is "SHOES"

When you've finished your post, share it with us by adding a link in [her] Mr. Linkey ..."
Please go here for her blog with the Mr. Linky listing others' 'SHOES' posts.

they died on the job, making a tunnel through the rock wall

why do five out of six June bugs die laying (lying) on their backs with their fat stomachs straight up?

Research on this matter might find a cure for cancer or aids. Who knows? Perhaps the cool-aid drinkers (Bill O'Reilly term) will pick up the cause.


Once upon a time the land was invaded by hordes of June bugs.  These bugs quickly overtook the human race and most of the animals.  A few animals they trained for manual labor tasks.  But when the animals died of an epidemic, the June bugs had to fend on their own.
They had always been jealous of the human's ability to travel.  Very quickly they developed automobile transportation.  Their vehicles were modeled after the Tootsie Toy fleet vehicles.  Most every boy and many of the girls had scads of these little toy cars, all of which were converted to become the first iteration of electric motor transportation.
These electric vehicles called the Bugs' Bug had become popular almost overnight.  They had discovered that the German built Volkswagen Bug was called the People's Car and now they had their own which they dearly loved.
But with the onslaught of the newly built Bugs' Bugs models a problem surfaced, one that seemed insurmountable.  There were no Tootsie Toy Bug's Bug sized roads.  They could not tear down the people's houses and buildings and it would take too long to go around them all.  And of course they could not go over.
Tunneling must be done so the Bugs could go under and through these monster-like existing structures.  They had not yet developed jack hammers and hydraulics so manual labor was the order.
The Bugs had not heard the old saying, "this is killing us!"  But with their vegetarian diet they lacked the ability to work hard all day chiseling away at the rocks and stones and other structural materials.  They died by the millions, generally a work crew of six at a time.
They lacked the ability to bury their dead or to cremate.  Soon the plague took over the land and they all died off.  No longer did they die six at a time but now by the kazilions.  Most all laying on their backs, naked with no shoes; according to statistics, five out of six always die that way.
Time will tell, who if anyone will gain control of the earth.

Will God see fit to recreate man?  If so, will he be the new improved model?

.
Let's see Jimmy, I have two globules and now have three more globules to add to.
How many globules do I now have?
Teacher, what it a globule?
.
- - - - -
.
140 Characters and spell checked by MicroSoft Word
µ-fiction Story Copyright
© 2012 Jimmiehov
All Rights Reserved
.
- - - - - -.
.
°Grandma of Succinctly Yours Week 76 gives these directions:
°Use the photo as inspiration for a story of 140 characters OR 140 words or less.
°Word of the Week, 'globule', and picture prompt were furnished by Grandma.