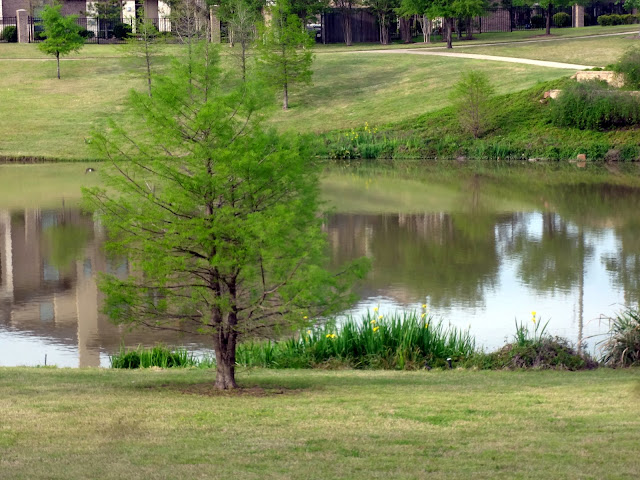 This was a "Walk Picture" that we took Saturday during our 'daily' walk.  I was taking pictures of some birds in the grass and when I finished I decided this cypress tree and water reflections were worthy of a photo.  [You can click on it for a larger view.]

Nancy.  I really didn't know any persons named Nancy until the 80's and she was the wife of my friend at church, Don ---.  I also vaguely knew the wife of my boss at NASA who was a Nancy. 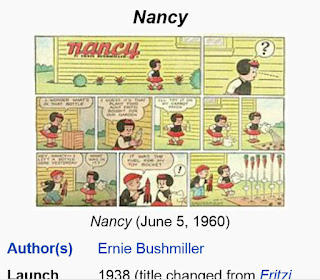 But I did know Nancy of the Comics when I was five or six, as I read the funnies in the comics even before I went to school.  Nancy first appeared in 1938 and I may have welcomed her about then.

The first real Nancy I knew was a family friend from Sunday school we met in about 1999.  She and hub, Joe, are still friends and we see them at least once a month still, even after moving away. 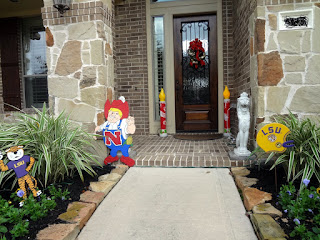 Nebraska.  I was born in Nebraska and attended the University of Nebraska for three semesters before I withdrew and went to work in the Elgin National Watch factory in Lincoln, Nebraska.  Eleven years later I returned to school and now have my degrees.

Harry Husker in this picture is also Vintage.  He gets put out for University of Nebraska football games that are broadcast on TV.  He belonged to my Mom, she treasured him.  Every Nebraska football game she, a true Nebraska Husker, would put him out.  Here, and there, he would come in at evening time for fear of being kidnapped. 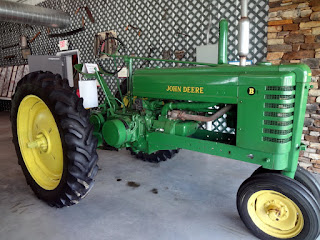 A John Deere Model "B" similar to this one was my dad's first tractor, purchased in 1938. His had steel wheels, at least in the rear, that had  large chisel shaped steel cleats bolted on around the rims.  In the late 1940's he had each of the rims with cleats cut off and a rubber tire rim welded in its place. This tractor had solid wheels but Dad's still had the yellow spokes.

John Deere motors were two cylinder and ran at low speeds. Thus the always unique "Putt, putt, putt ..." sound made them recognizable even when one could not see them. Like a Harley Davidson motorcycle, you could hear and identify on coming. 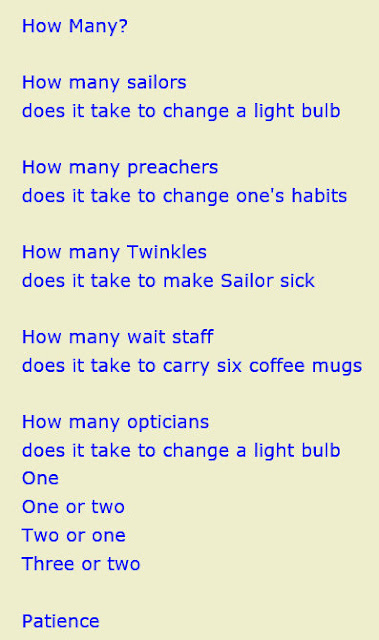 The last sections, 'opticians', was sort of an earworm ditty I had in my head.  Just prior to hearing the little riddle, I had been to my eye doctor for a check up.

On my other blog, Jim's Little Photo and Poem Place, after what you see here I told of a Mark Twain story where a conductor had an earworm, the song, "Punch, Brothers, Punch."  Click on these two links to see more:
My other blog link
Mark Twain's story on-line link

The Fine Print:
- Teresa of Eden Hills is running this meme, Friday's Hunt. She has three alternatives for us to post about but this one, Alphabet series, will be the one I will try to follow and post about. - Her rules are: "Welcome to linkup for Friday’s Hunt. It’s very simple. Anyone can participate. The link opens at 7pm Central time and will close Sunday at 7pm, so you have plenty of time to enter."
- The Mr. Linky address here has a list of others who are participating if you would to read what these folk are doing for the Friday post. Today they are a dollar at our local Sonic drive in/thru restaurant.  Limit three, plain, dressed, or with chili.

I'll get three with chili.  Take them home after stopping at our Kroger store for a few items, and add some cheese and mustard.  I will eat one, Mrs. Jim eats one, and will save the other for a snack.
[Click on the picture for a larger view on a cheese hot dog that I make.]

My cheese is generally low or no-fat, the hot dog is, if I find them priced right, is Oscar Meyer bun length, Ball Park are okay if I don't like the other's price.