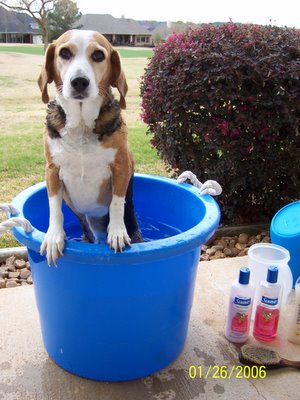 Splish Splash, I was takin' a bath
Long about a Saturday night
A rub-a-dub, just relaxin' in the tub
(Artist: Kevin Spacey Lyrics, link)
.
. 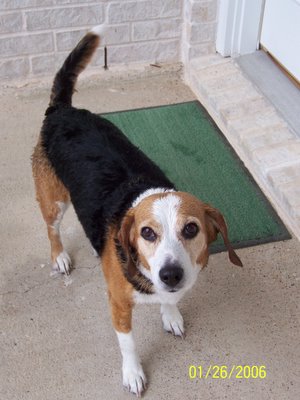 Thinkin' everything was alright
Well, I stepped out the tub, put my feet on the floor,
I wrapped the towel around me and I
Opened the door, and then I
Splish, Splash! I jumped back in the bath.
Well how was I to know there was a party going on?
.
The bath for Adi
.
Well, Adi did have a bath yesterday. These pictures are from an earlier bath, but that is exactly what she did today.
.
She gets real frisky after her bath. If I let her out on the golf course she runs away a long way. This time she had to run around in the house, as I had her come inside after we toweled off.
.
When she was a puppy, a man found her and brought her back to us in his car. No telling where she had been. Rolling around in the grass to help dry off, I'm sure.
.
Rolling around with Adi
.
Adi didn't roll after her bath, but she did roll in a sand trap yesterday. Two sand traps, in fact, the first was the same one she did before.
.
We had to hurry out of the second one as a lone golfer wanted to hit. I think he just came to that hole to play a little for practice. The hole is a par three and we were pretty close to the green in the sand.
.
Bath routine for Mr. Excitement
.
Do you have a routine when you take a shower? Well I do (so does Adi).

It all takes ten minutes. If I'm in a hurry, I can do it all in nine. I should have made that the top ten list, but maybe nine will do. Well, last night I forgot the # 3 back scratching part with the brush. That keeps the crusty brown patches from growing there.

Scrubbing my hair with the brush is the reason I haven't gone bald. I've done that since I before I was twenty. Tim is trying this and found that a little hair is growing back. The last time I checked with him it was.

Once in a while I get carried away with ideas for blog topics and lose my rhythm. This gets me out of the routine and who knows what I skip or have to do over again. I can't carry my little notebook into the shower. I should just get out and write my brilliant idea right then and there.

Last night on Dave Letterman, there two cute ladies from Oakdale, Louisiana. Both had touched a dead guy. More than one. One lady was a coroner's assistant, her sister-in-law was a registered nurse.

Some of the other parts of Dave's show were pretty raunchy. 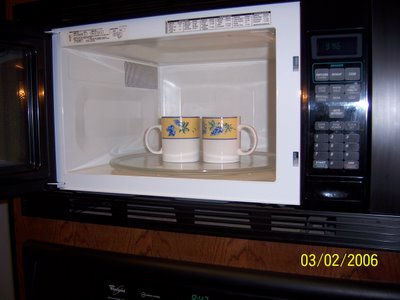 Look in our microwave

How do you tell which coffee cup is his and which is hers?

We have it all figured out. See the February 24 post (that was our anniversary, # 33, remember?) for the answer.

Sweet Home Alabama
(Review link)
Just finished watching it on ABC. Reese Witherspoon is the first entry in my book of stars. 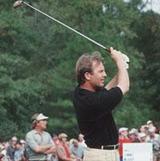 Who is this man?

I'm not telling. You will have to look at yesterday's blog, then go to the comments. Just another has-been sports celebrity, and he is trying to raise a fuss. But he did leave a comment on my blog, fuss or no fuss.

While you are checking there, won't you please leave me a comment. I feel good reading them, even if you do pick on me. 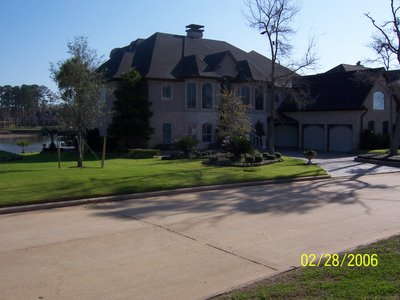 Life of the rich and famous?

Well, yes, this person, the owner of this house, is famous. He is rich. He is a sports figure. This house is his lake house. His living house is in Houston, I'm speculating that he has mountain homes, homes in foreign countries, a luxury apartment in a New York City and Boston. I might be underestimating. 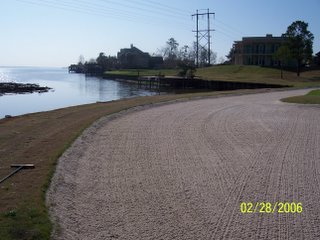 Adi and I did our two plus mile walk yesterday, we decided to take a different route. It took us across the golf course and through another yard to his street.

That is his house to the left of the power line poles. That sand trap is on hole 17, before Adi walked and rolled in it. She left nice little tracks and a big smooth place where she rolled. She sure is a nice hound dog.

This person is Roger Clemens, the most famous pitcher among the living and active, i.e. not retired, major league baseball pitchers..

Roger hasn't decided whether to play or retire for this year. He is at the Astros spring training camp for the minors right now.

And guess what? He made the front page headline yesterday in our Houston Chronicle. The headline said (link), "Will he play ball?" In smaller print, "Several teams have made their pitches, but only the man on the mound knows."

There was another story (link) besides his future for next year; his son, Koby Clemens hit a homerun off ol' Dad in batting practice! Koby Clemens was drafted by the Astros, right out of high school this year.

I hope he plays for the Corpus Christi Hooks, the Astros' class AAA farm team (see link on my sidebar). That will give us a another reason to go to Corpus more. Our cousin, J. J. Gotsch, is president of that team and we will visit more with him too.

Our lake is way down, it has been ever since hurricane Rita this summer. Rita damaged the dam by messing with the huge boulders in the earthen part. They were supposed to give strength and stability to this part of the dam, but they were no match for the waves kicked up by Rita. 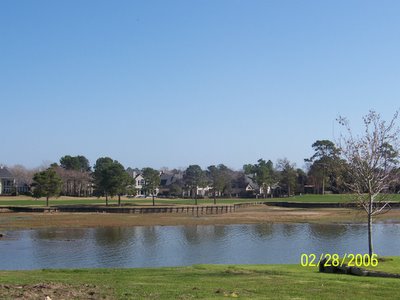 Those aren't islands you see in this picture. Showing is our 'lakeside' fairway 16 and the housed behind it. With a ladder, the golfer can hit out of this hazard with ease. [Our house is up the hill, behind those houses, another row of houses, and another fairway. We can see water from our back windows through those houses until the trees get leaves again.]

The dam is expected to be fully repaired by summer for a few million dollars, about 1.1 mil coming from FEMA. Completition will be too late for water refilling for summer use, we will have to wait until the winter rains for normal levels.

The middle picture shows a boat dock behind the house on the right. Neither these people or the Clemens can use their boats, along with a lot of others. A few home owners have gone to the expense to dredge a channel to their docks.

Those must be some pretty ardent boaters, huh? 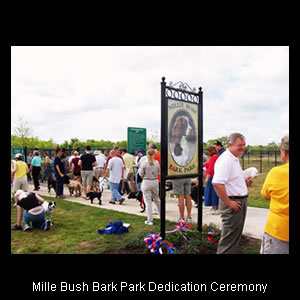 We started at seven in the morning. Mrs. Jim made coffee and we talked and had our granola bar. What was different yesterday was that we were still at Karen and Billy's at seven. Amber, Adi, and the neighbor Friend of GC4 would also be involved. This was a teacher 'work day' which meant a student 'play day.'

The girls soon woke up and were ready for breakfast. Their choices were fake biscuits (out of a can), French toast (out of the freezer), or GC#4 could cook some of her famous scrambled eggs. I was ready for the eggs, I think Mrs. Jim was too.

But the girls opted for fake biscuits. They were ok with coffee and strawberry preserves. No coffee for the girls, they had a half gallon of milk. I had actually been thinking eggs and biscuits, but I wasn't the boss this time.

After that, Friend had to go home. She had spent the night, but now homework and a sports game beckoned for her to go home. 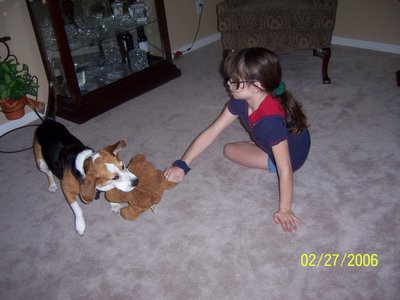 GC#4 and Adi played for a while. GC#4 had been hinting for us all going to the bark park with Adi. Not just any doggie bark park, but the famous Millie Bush Bark Park. For pictures, go to http://www.houstondogpark.org/photos6.htm. That had to be done before lunch at the Sonic. Because in the afternoon we needed to go to the library. 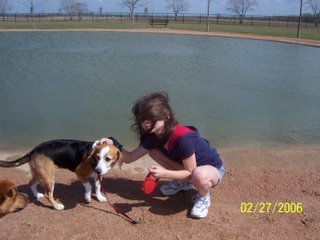 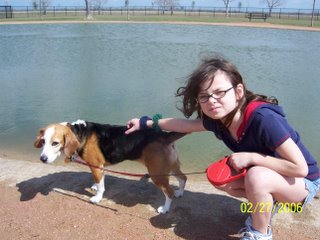 .
Adi did like the paved protected side of the dog swimming pool. At places it was eight inches wide, in some it was 18. She did not not want to leave that concrete once she had found it.
. 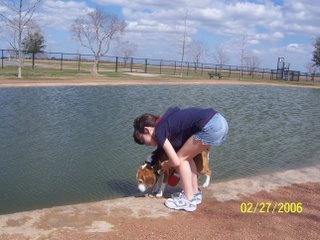 Adi did not want to go swimming either. Not this dog. Hound dog she was, maybe wade, but it is not fitting for her to be swimming.
.
We couldn't find the Sonic so had to eat at McDonalds. GC#4 had a Coke, fries, and McNuggets. Mrs. Jim and I ate similarly, but with fewer fat calories.

We didn't make it to the library either. We all got tired and sleepy. GC#4 and Adi had naps, Mrs. Jim and I never got ours started. 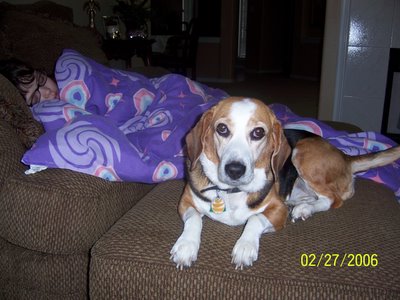 Adi wakes from her nap for a photo op.

I heard about a lady who threw all her 37 cent stamps away now that the 39 centers are the good ones. 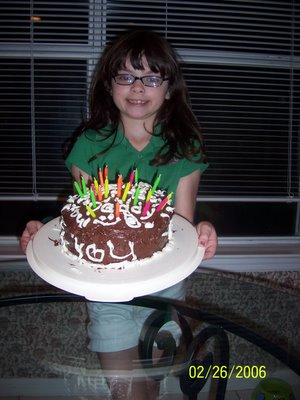 In the late afternoon we came to Karen and Billy's for cake. Karen and GC#4 had made it for Billy, to be a part of his birthday celebrating. 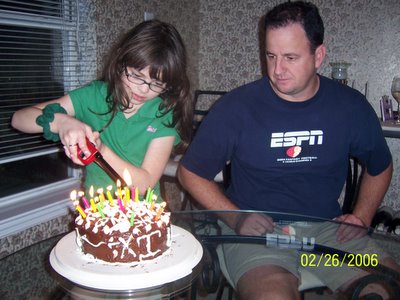 GC#4 found a safe way to light all those candles. 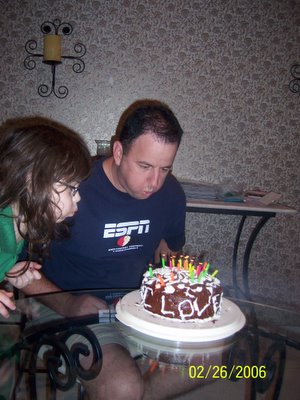 There were enough candles for both to blow them out. Who all was making a wish?

Towards evening we ate. Billy and Karen are excellent cooks, they made grilled salamon fillets, risotto, and yellow squash and zucchini. All very healthy and delicious. 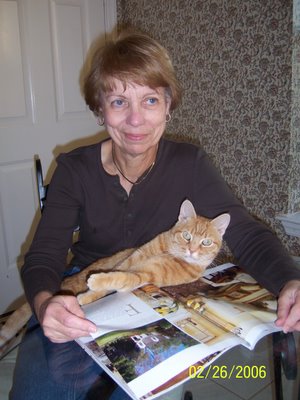 We were spending the night, so Mrs. Jim and Amber settled down for a before betime reading spell.