A contest you can win -- Orange yu glad I told you about it! 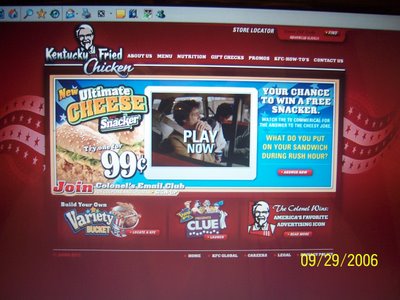 You can play through October 15. The prize (1000 will be awarded each day so it is run sweepstake style--for the ones answering correctly this riddle--to choose the lucky winners) is one New Ultimate Cheese Snacker sandwich.

The correct answer to the riddle: TRAFFIC JAM (not case sensitive).

Answer to yesterday's where am I quiz

The Letterman concert, right here in Conroe, Texas. We weren't going to go but a friend who couldn't go gave us a couple of her tickets. Thank you, Shirley, we loved it!

In the center of the picture below is Tony Butala, one of the original Lettermen. They started in the late 50's and were signed to Warner Brothers Records in 1960. If he was nineteen in 1960, he would be sixty-six now. His long hair is very white.

On the left is Donovan Tea, from Houston, Texas. He joined the Letterman in 1984. He is fifty-one. The other singer is Mark Preston, he also joined in 1984 but took seventeen year sabbatical after singing for five years.

I wanted to put on some of The Letterman music but they guard it closely and only want it sold legitimately. The best I can do is five sample songs [click] here. Then push the red SAMPLE button.

I didn't try to download the 'six free songs' because when I did it wanted to download a player for me. I didn't want to hassle with any spyware that might come with it. I have three perfectly good players already.

Mrs. Jim's favorite Lettermen song is their Summer Song. I like them all about the same. Before I was told I couldn't sing [very good] I sang a lot of those songs. celebrities Vocal+Groups Music Quiz Entertainment Life The+Lettermen Contest Sweepstakes Jim+Bunch+eats KFC Food Kentucky+Fried+Chicken Fast+Food
Oh yes, even though we were in the balcony (second row) Donovan Tea did come up and sang to us. Mrs. Jim and I got to shake his hand, he wasn't into Texas ((((HUGS)))).

Where were we last night? 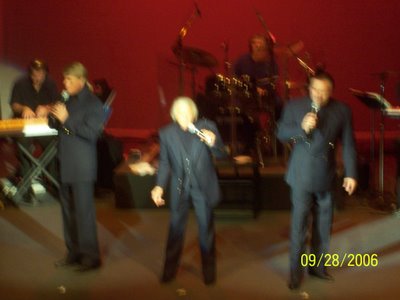 . Celebreties Vocal+Groups Music Quiz Photos Entertainment
This is the only hint you'll get for now.
The picture is fuzzy because Mrs. Jim and I were in the nosebleed section [second row, though].
.[[click on picture for full screen]
[it won't help much]
Who?
What?
Where?
When: Last night.
# posted by Jim : 9/29/2006 09:37:00 AM  6 comments

Banned Books Week, are you celebrating?

Don't despair, mostly politicians, librarians, and activist parents already are on top of all this. They will do our dirty work (link to song) for us. 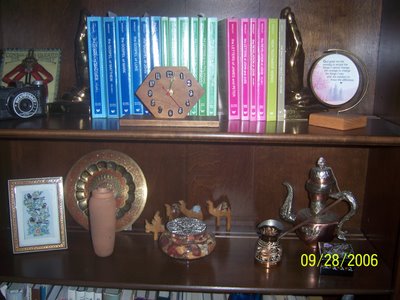 [Missing here from the Barclay set is the LETTERS to the HEBREWS -- I've been using that one. Click on picture for full screen size]
.

I'm sure we need someone to monitor this situation. Without the ALA competitors would be bribing the elected officials right and left to get the other guy's book(s) banned.

I think some of them around here go overboard, but it's win some and lose some. So come on strong and get what you really want by conceding what you didn't care about in the beginning.

I don't know a lot about most of these books listed below. I do agree with the banning of "It's Perfectly Normal" by Robie Harris. It is aimed at an audience way too young to even be worrying about the topics (sexual and sexual orientation) covered.

The Judy Blume book, "Forever", uses language I wouldn't think about using and wouldn't care to even start reading. Should it be banned? I'd say put it behind the counter and do the show I.D thing.

I also would think less of my neighbor for reading "Forever" but I don't think I would want the law preventing him from reading it.

"In anticipation of the 25th anniversary of Banned Books Week (September 23-30, 2006), the American Library Association (ALA) compiled the top 10 most challenged books from 2000-2005, with the Harry Potter series of books leading the pack. The 10 most challenged books of the 21st Century (2000-2005) are:
1. Harry Potter series by J.K. Rowling
2. "The Chocolate War" by Robert Cormier
3. Alice series by Phyllis Reynolds Naylor
4. "Of Mice and Men" by John Steinbeck
5. "I Know Why the Caged Bird Sings" by Maya Angelou
6. "Fallen Angels" by Walter Dean Myers
7. "It's Perfectly Normal" by Robie Harris
8. Scary Stories series by Alvin Schwartz
9. Captain Underpants series by Dav Pilkey
10. "Forever" by Judy Blume"

Your turn:
What do you know about any of these books?
Should they be banned?
Which ones [there are longer lists on the ALS site]?

The Windmill Raising -- Pictures of it going up 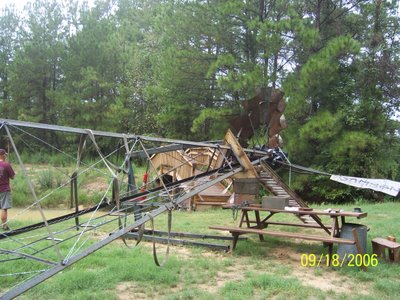 .
This is where we left off last. We couldn't pull it up with a truck using a rope through a pulley hanging in a tree. Owner, John, was dissapointed, more than a little bit (link).
. 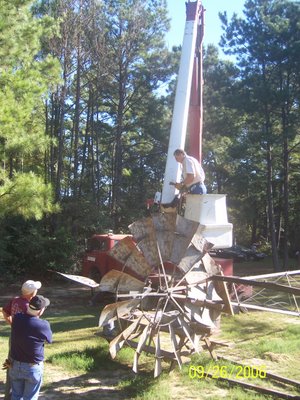 .
This time we got a bucket hoist belonging to electrician friend, Pat. I know John wanted to be in that bucket but it wouldn't happen.. 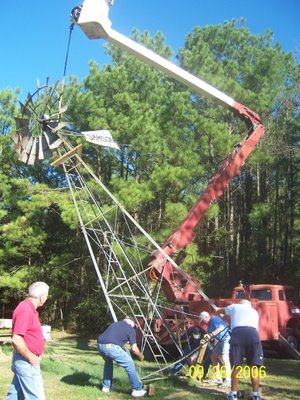 .
Up she goes. John names his old cars, I don't know if this windmill is named or not.
. 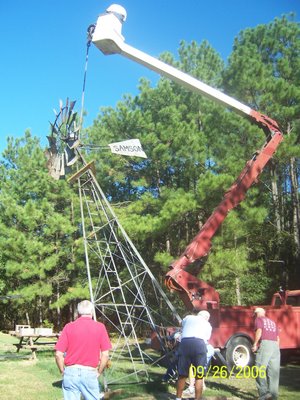 .
Up some more. That's Jim (not me Jim) with his hands in his pocket.. 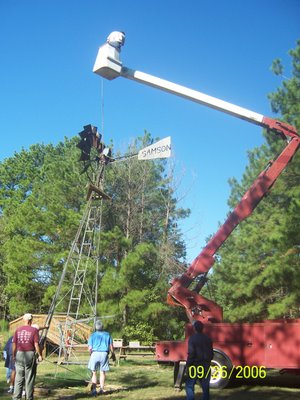 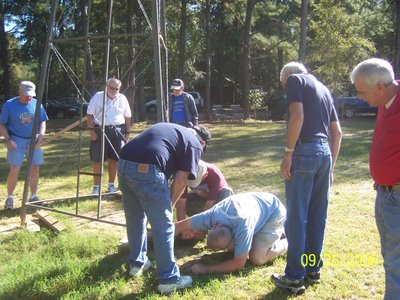 .
Here's where the ground crew really gets action. Back in July we had set those anchors in concrete and preliminarily attached the tower.
Here WE are wrestling the legs so the bolts will line up. [I took a break for a moment to take another picture.] Nine of us came yesterday to help. All of us had a job there one time or another.. 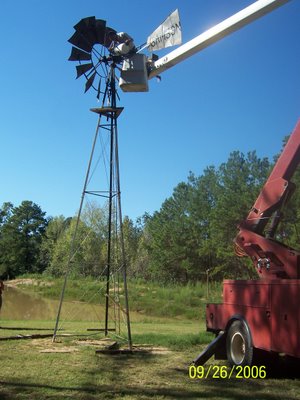 .
It's tied down now. While he had the bucket up there, Pat obligingly filled the transmission with oil. That saved John a climb up the ladder. [He did test the ladder in a few minutes, you know boys MUST climb a windmill if there is one. Just because it's there.]. 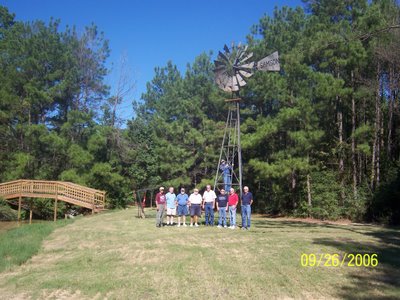 .
This is the group, all nine of us. From left to right, John, Larry, me (Jim), Chuck, Bill, Gene, Dick (on the steps), Jim (other Jim), and Bill (another Bill)
In case you think the windmill isn't exactly straight, the picture lies a lot. The bridge posts are straight up and down. John will drop a plum line soon like we did when we set the legs in the concrete. We may have to make a few adjustments, we will just see.
. 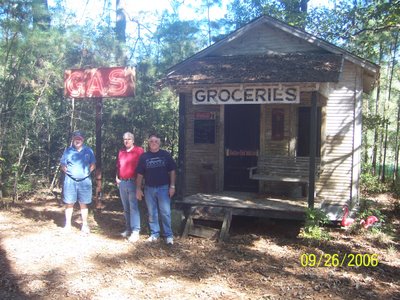 .
John has other toys. Part of his back yard looks like this. He had two gas pumps but sold the one that was for here. [John will sell anything is your price is right.] The other is in the front yard converted to a yard light that turns itself on at dusk.
. 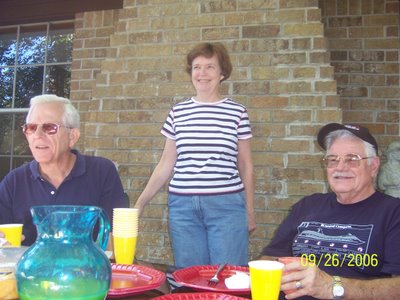 .
We didn't linger long in the back yard. Mrs. John had a nice on the patio breakfast for us. Biscuits, deer sausage, cantalope, O.J., and coffee. That was a nice lunch for me. Friends Food+and+Drink Jim+Bunch+Eats Toys Fun


.
[click on any picture to enlarge it]
[go here (link) for the beginning of this story]

The Windmill Raising -- It's up this time!

.
It was almost a no brainer this time. In a couple of hours things looked like this.

John is pleased, it doesn't tip as much as the photograph would make you think. Take a look at the bridge posts, they are straight up and down.

More pictures should be on here some time tomorrow. I'm getting the house ready now, Mrs. Jim is coming home in about three hours. Friends Food+and+Drink Jim+Bunch+Eats Toys Fun
.
[click on the picture to enlarge]
[go here (link) for the beginning of this story]

The Windmill Raising by the Dirty Dozen 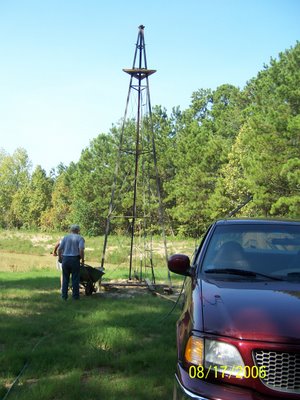 .
Here we have progress. A bunch of us guys got together to raise this windmill. We did fine as you see here. That was last month.

My friend, John, found it in Kansas and wanted it for his front yard. He brought it home in pieces and now has it semi-restored and ready.

The aeromotor still needed a little work but it would be raised up soon after John did a little bit more work. Mrs. John wanted to get a bucket truck over to hoist it up, John favored having us guys do the work.
. 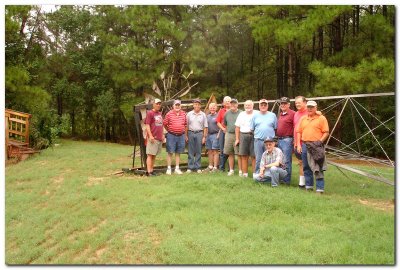 .
Last week the crew assembled to do the work. Mrs. John had lost out all the way. John had taken the windmill tower down and put things together on the ground. Now we were to raise it again, this time complete and ready to run. Just add oil.

The Dirty Dozen crew from left to right: John, me (Jim), Milton, Jim (not me), Gene, Paul, Chuck, Bill, Dick (kneeling), Jim (still another), Ray, and Robert. All of us are set to man our posts.. 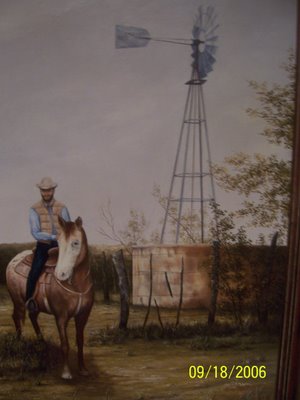 .
In John's mind, this is what things should look like when the job is done.

Actually I think the rider and horse enhance the situation a little. John has an old Ford tractor but no horse. Even the water tank adds to the scheme of things. .

.
Well, that didn't happen. With the motor attached it was too heavy for the rope lift John had rigged in the tree. Things started buckling and sliding.
. 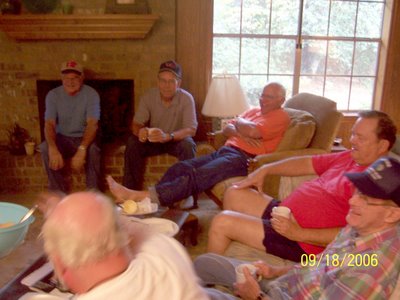 .
So we just left it like this and had coffee with breakfast and talked.

Never fear, a crew is coming around 9:00 today and we will get it raised. John has straightened and rebuilt.

Going for him the most is that John has arranged for a bucket truck to raise it all up, motor and tower all at the same time.
Friends Food+and+Drink Jim+Bunch+Eats Toys Fun
. 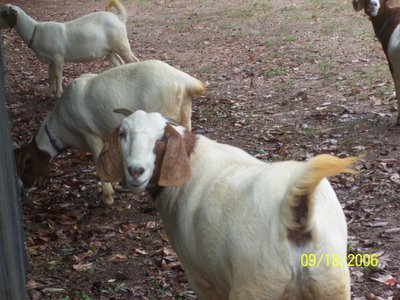 .
These guys will be here as sidewalk superintendents again that day.
I'll let you know how it turns out. I'm betting on a job well done this time!
Friends Food+and+Drink Jim+Bunch+Eats Toys Fun

.
[click on any picture to enlarge it]
[go here (link) for the finish of this story]

A Few of Jim's Toys 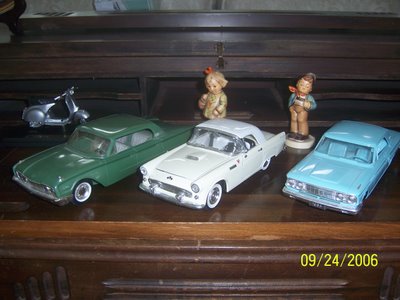 .
Grown boys have toys. Some toys are big, some are small. These are fairly small.

Back row, right to left:

M1 Hummel Club girl--early 1990s--Ich bring Dir was (I Brought You a Gift). From Mom's collection.

Late 1800s or early 1900s writing desk. From Dad's office, inherited from his Aunt Minnie.
Toys Hobbies Life
Toy+Cars Collections Hummel
Notes:
1. I have not had any of these vehicles full scale as drivers.
....One I have had a similar model two years older.
....One I have never had this model of vehicle.
....I'll tell you later, in a couple of days how close I came.
2. None of these toys are very valuable, the Hummel figures are worth the most. I do not have the boxes for them.
3. You can click on the picture for full screen. Then do function key 11 for a larger view. F-11 key restores header information, "Back" button returns to blog.

The Harvest of the Lord: 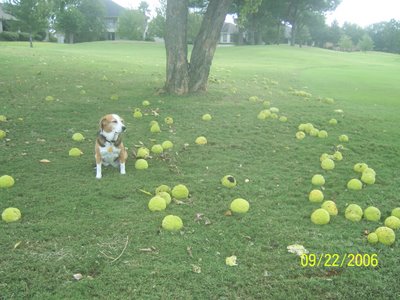 14. I looked, and there before me was a white cloud, and seated on the cloud was one "like a son of man" with a crown of gold on his head and a sharp sickle in his hand.

15. Then another angel came out of the temple and called in a loud voice to him who was sitting on the cloud, "Take your sickle and reap, because the time to reap has come, for the harvest of the earth is ripe." 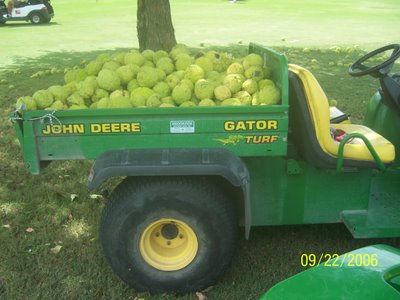 .
16. So he who was seated on the cloud swung his sickle over the earth, and the earth was harvested.

Romans 6:23 -- The wages of sin is death, but the gift of God is eternal life in Christ Jesus our Lord.

Romans 5:8 -- God demonstrates his own love for us in this: While we were still sinners, Christ died for us. [Also the familiar John 3:16 -- For God so loved the world that he gave his one and only Son, that whoever believes in him shall not perish but have eternal life.]

Romans 10:13 -- But God demonstrates his own love for us in this: While we were still sinners, Christ died for us.