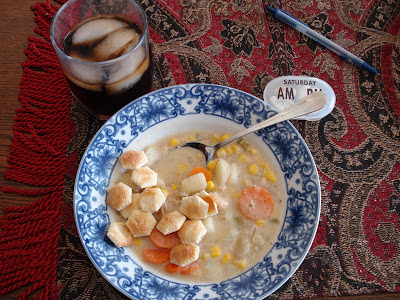 .
Have a bowl of my chicken potato and vegetable soup that I made for last Friday night. Above I had some leftover soup Saturday at noon along with a coke and my meds.

Half was for my just a little under the weather friend and the other half for Mrs. Jim and me.

It starts our with a basic Potato Veggie Soup and you can change yours from there. I'll show you how I made mine and what all I did to the basic recipe (not much).

The recipe and directions are a couple of pictures down. 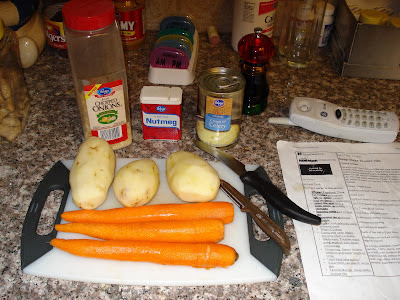 Here are the basic ingredients to the recipe except the chicken which I added. 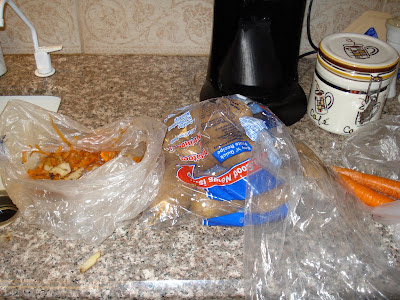 Peal and chop carefully and you won't have big a mess in the kitchen. 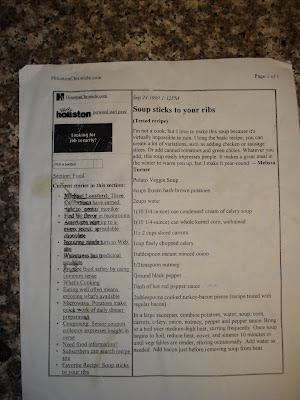 Now for the recipe. Glance at it in large size, then go to a super size picture to get it ready for copying. Or you could just cook from it right here.

Although the recipe is for basic potato and vegetable soup, you can add whatever you wish. I added about a cup and a half of cooked chicken here.

I also bought some sausage to cook and add a little of it but Mrs. Jim thought it would be too robust for the under the weather person we were making it for. 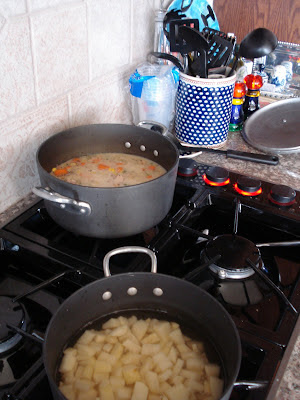 All set now. I boiled the potatoes separately with a little salt and started them a little later. I didn't want them to get mushy on me while waiting for the celery and carrots to cook.

Variations by Jim:
>> I used four large raw potatoes, peeled instead of frozen hash-browns (the five large carrots I had made plenty).
>> I added about a fourth teaspoon salt to the potato water, salt is not in the basic recipe.
>> No hot red pepper sauce. (Mrs. Jim doesn't do this anymore either, it doesn't add that much and probably wouldn't sit good on an under the weather person.)
>> Don't spare the nutmeg, Mrs. Jim says that brings out the flavor a whole lot.
>> I wouldn't buy any bacon just for the little this soup calls for. I did get the sausage but didn't put it in. With chicken I think the bacon is not needed anyway.
>> One and a half cups of cooked chicken made it hardier.


After the potatoes were finished, I drained and washed them. I know, I threw away a lot of vitamins, but I take a Kroger brand Century Senior equivalent every day so that isn't an issue with me.

Really, I drained and washed the potatoes because I am cutting out my starches. If you don't drain them, and still cook them separately, put half the liquids in with the potatoes and the other half in with the carrots, celery, and other stuff.

Originally it was in the Houston Chronicle Food Section on-line, but it isn't there anymore. At least I can't find it. Look around though, they have a lot of other good Texas recipes! 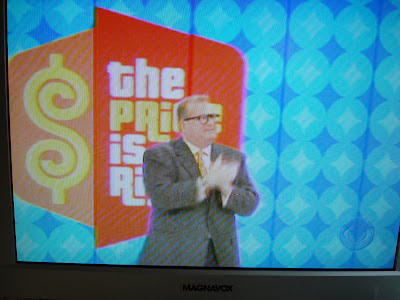 All work and no play makes Jim a dull boy. That's what I was watching while I worked.

I sure do like this guy a whole lot better than I did Bob Barker. I think the ladies liked Bob Barker better, but hey, he has a reputation for being a ladies' man. 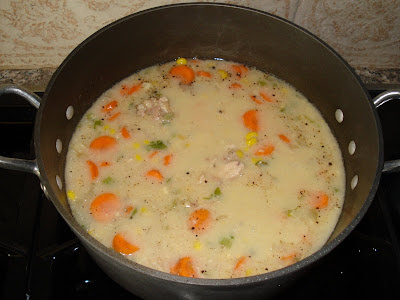 Here you can see the chicken pieces floating on the top. The potatoes are added and it is ready for the cook's sample dish. 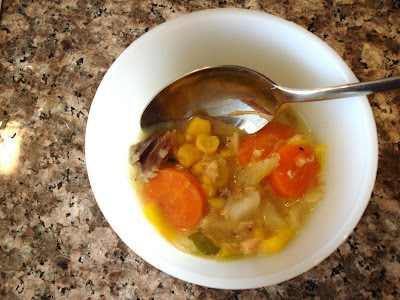 Ah! For the effort I put in, it really came out good. I can't wait till supper when will have this and a grilled cheese sandwich.

Half this soup we are taking to an under just a little the weather friend. Mrs. Jim generally makes the soup but today was Ladies Day and we needed to take it in the evening. So I made it. I love to cook, but just don't make anything very hard very often. This soup isn't hard to make.

Tuesday Morning -- Here in Bentwater, our subdivision -- It's Ladies Day

At their class reunion the husband and wife were reminiscing with old friends.

The fellow kept looking at an obviously inebriated older lady.

"Do you know her?" asked his wife.

"Yes," he replied, "she is my old girfriend. She started drinking the day we broke up and has been drunk ever since."

"Goodness!" says the wife, "Who would have thought a person could go on celebrating that long?"
.

Tuesday is Ladies Day here at Bentwater. Especially on the golf course. On their play day from 40 to 60 women are matched up into flights. Those ladies play 18 holes of golf. To do that they must have a handicap of at least 36. 
Other ladies who don't want to play all 18 holes or the beginners with handicaps higher than 36 play only nine holes. Both groups have a very good comradery. 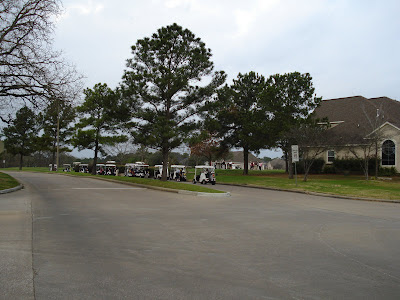 Mrs. Jim has played in both groups, the last few have been with the 18 hole group. But today she wasn't a part of this group that we have seen above. She and her friend, Ellen, played by themselves on our other course. Mrs. Jim generally plays with the group on Tuesdays and with her golfing buddies on Fridays.


Then there is this group of ladies who don't play golf so much. They are on the tennis courts today. 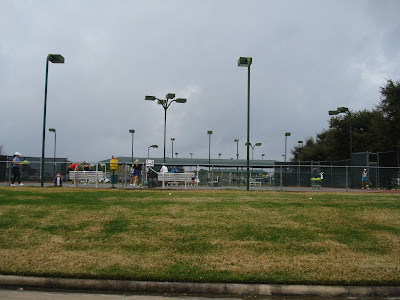 Or some go for a nice walk. More than half were wearing shorts on this nice warm spring day. 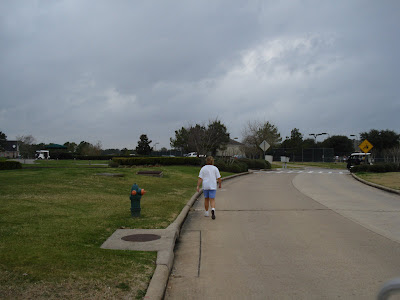 
Congregating on the street is nice too. Do you think these ladies might be exchanging the latest in neighorhood gossip? 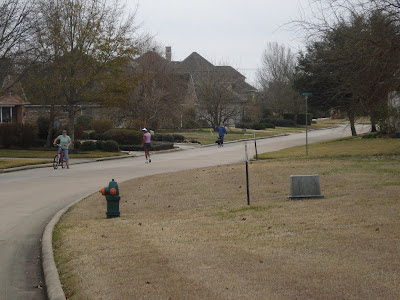 Adi had a nice walk also. We went on a different route yesterday, and got to see a lot of different sights than we usually do on our fairly set routine. 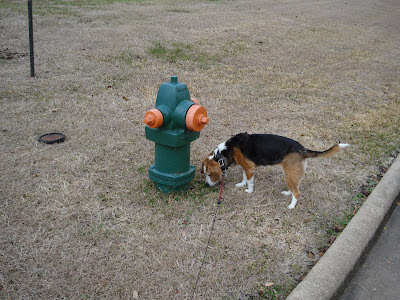 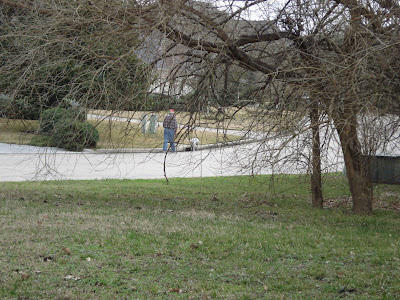 
Then there were these ducks. Just minding their own business, aren't they? 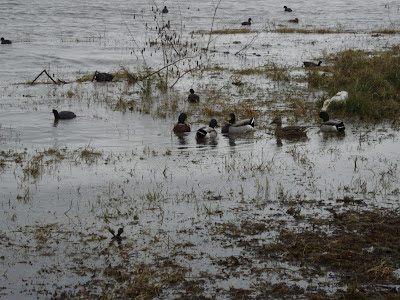 If Adi could have her way, those ducks would be hustling along out of there. 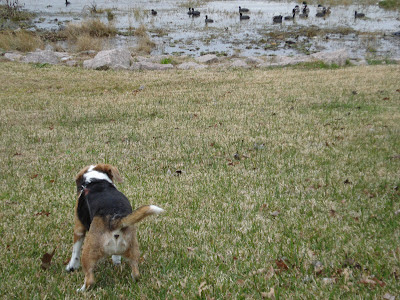 Do you think Adi could play golf? And that I could be her caddie? She directed me to get her Big Bertha Light. Wait a minute, that's my driver club she wants! 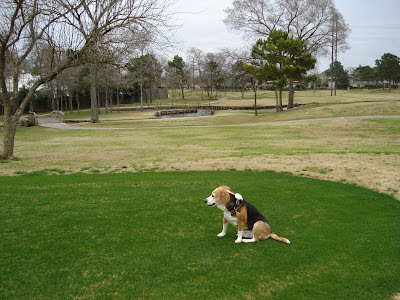 That borrowing of clubs serves her right. Look, she's lost her ball out here in the rough. 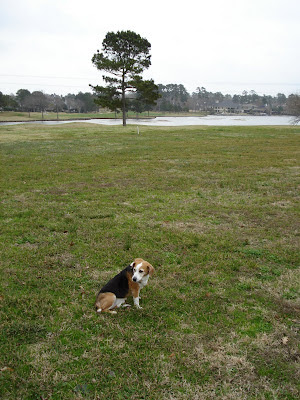 
All's well that ends well. We had a bowl of my left-over chicken potato and vegetable soup that I made for last weekend. And a coke and my meds (in the wrong case) for me.

Thou shalt not steal. [Exodus 20:15]
But I just did, read on.
.
"You are driving ... at a constant speed. On your right is a two-foot drop-off. On your left is a fire engine traveling the same speed as you are. In front of you is a galloping horse you can't overtake. Behind you is a zebra. You, the horse, and the zebra are all traveling the same speed. What must you do to safely get our of this highly dangerous situation?" 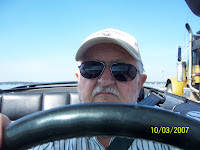 "The answer: "Plead with the man to stop the merry-go-round, and let your grandkids ride by themselves from now on." 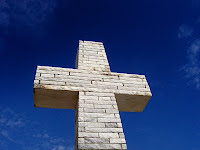 Cross picture courtessy of Andrea's Thought of the Day (link)

[Can we find ourselves when we are lost in the crowd? In ElPaso, we could look up to the west, Mount Franklin was there for our orientation. In a strange city, we can look up and see (hopefully) the tallest building we know. From the hilltops in Nebraska, we could see the antenna farm lights of North Omaha. Etc, etc.]

"Are you turned around, lost, on a merry-go-round to nowhere? Are you on a strange path that ends in dark places? Look up."