This Friday feature for JIM'S LITTLE BLOG helps me tackle the blogging problem of writer's blahs. So my advice is "when you don't feel like writing anything, post a picture." That's what is happening here.**

Do you see anything that I could possibly read about this driver from this picture? You wouldn't think so, no bumper stickers, no dents, just a plain old Jeep Liberty (??) (SUV) but please read on. 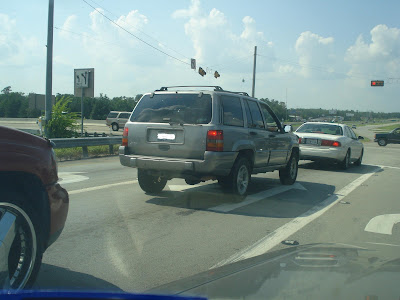 We were in traffic about like this picture below and four of us were following an 18-wheeler semi rather closely. We were in the fast lane (left) because there were cars in the right lane. When we got ahead of the slower cars the truck did not get over to let us all pass. 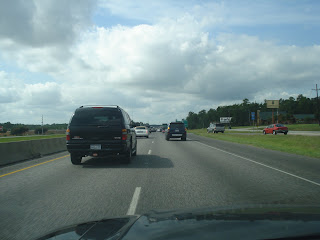 I was the last of the four, the SUV above was third. As he pulled in front of the semi he did what I believe was to 'flip the bird' at the trucker. I was shocked, this almost amounted to road rage.

Then I came up beside the SUV on the feeder. Was I ever surprised to find out the 'HE' driving that SUV was a lady (??) with a teenage boy as passenger.

O boy, my impression of her went from a zero to a minus ten! Obviously an uncouth woman out of control of herself. Even though she was dressed nicely, this was a camouflage for a sinister heart, normally hidden in nice garb, which revealed itself to the world out thereon the highway--and terrible to think, but to her own son. Shame!

Or ,,, it could have been this way. This nice lady may have been pointing to the side she just came from and indicating to the semi driver that he should be driving in (or at least now get into) the slower traffic lane on the right.

So, in this case this wonderful lady was doing the rest of our civilization a big favor. That truck really did belong in the right hand lane.

Guess what, he went there right after I got pulled into the fast lane ahead of him. Note to self, to be fair, he could have seen all us drivers he caused to drive slightly not safely. Too late for the four of us but great that he did move over.

My dad would teach other drivers lessons on the road. Like 'teaching' faster cars move over so he could pass or to drive in a more polite manner. I inherited that trait from him, I use my pointy finger to point upward and then shake it admonishingly at the errant driver.

That is the parent, teacher, and human nature in me. Occasionally a driver will not be in the mood for correction and will wave another finger back at me. I hope for these folks' sake that I do not ruin their day in some way.

Too bad the whole world doesn't do it right like I do!

** This is not an original idea. Reading cars came from a sermon I heard last Sunday, brought by Dr. Roger Yancey, Director of Missions, Tryon Evergreen Baptist Association, of which our church, First Baptist Church of Conroe Texas, is associated. I believe my count of 118 was pretty close (link for you to check yourself).
I saw a few cowboy churches and quite a few Hispanic churches. All are within a 35 mile radius of our home.

This post continues our visit in Colorado with our Montgomery neighbors, Roger, Mrs. Roger, and Luke at their ranch near Telluride.
Today's post shows us in Telluride viewing many friendly dogs as our friends act a wonderful tour guides.
This is part two of two for the Telluride post.

Click on any picture for large sized view.
Change the "800" to "1600" in the URL Address for super sized view. 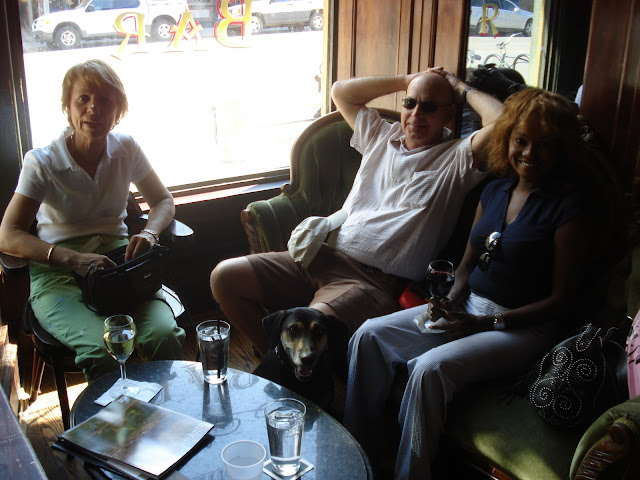 Here three (+ Luke) of us four (+ Luke) had stopped in for a cooling refreshment. Roger had his usual Arnold Palmer drink (half lemonaid, half unsweetened tea).

Telluride has dogs, a lot of dogs. It reminds me of my hippy days when everyother person had a yellow dog. At the University of Houston they would park their dogs like modern students park bicycles, just near the stairs. 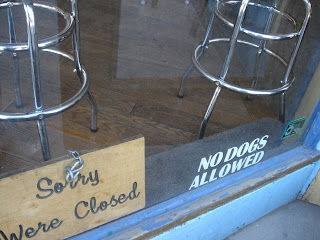 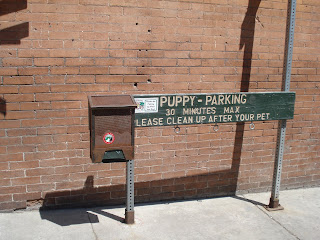 There are a lot of bikes in this hippy-like town too!.
Bike pictures: [pretty bike] [lots of bikes]
I wonder if they ever get mixed up? 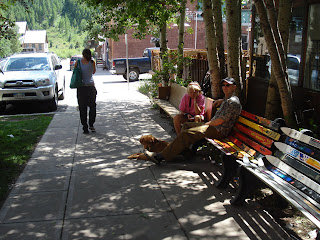 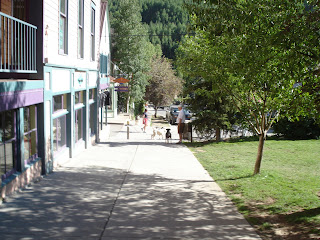 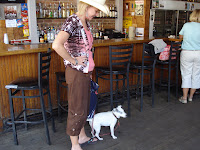 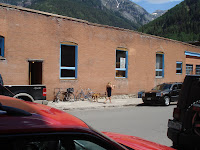 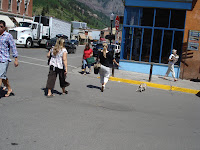 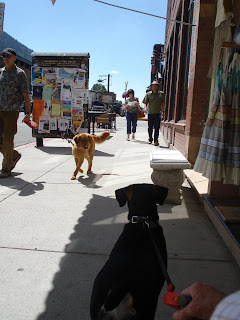 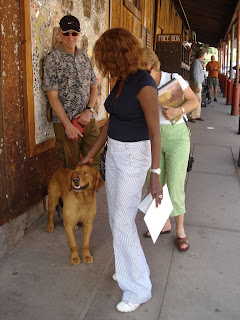 Roger, Mrs. Roger, and Mrs. Jim made a lot of new friends. 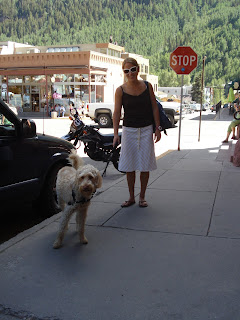 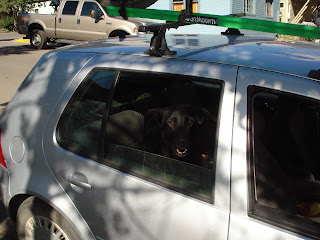 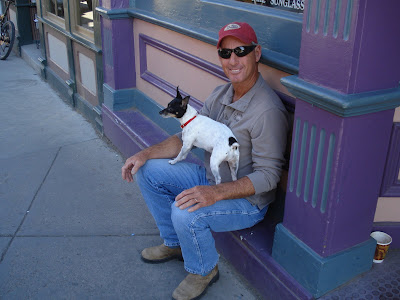 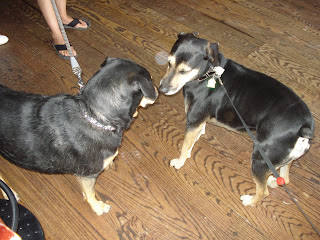 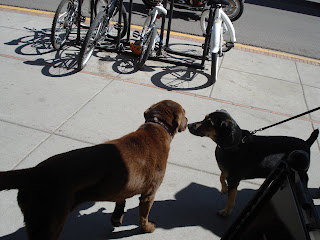 People were very willing to pose with their dogs.
Luke also made himself a lot of friends this day.


Luke is ready for home! 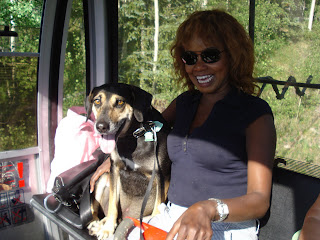 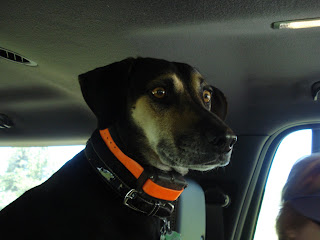 And see how relaxed he is now on his fourth cable car ride
(two legs over, up and down the mountain, and two legs back)

Luke loves car rides, here he is on the watchout for deer
.
Tag: Colorado Holiday 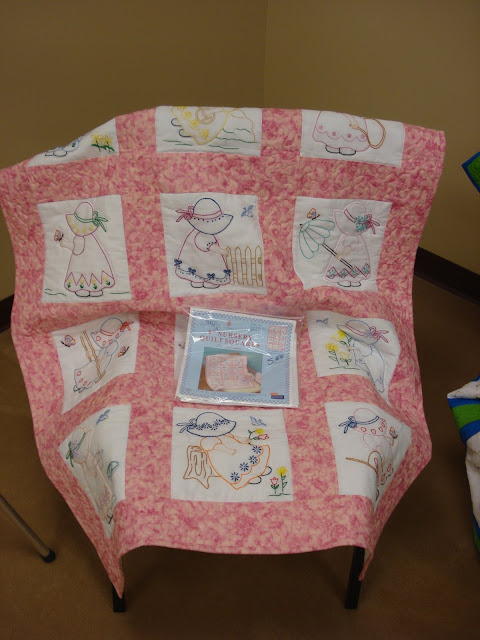 [large picture] [super sized]
.
These baby quilts are for the poorest mothers who are having babies in our local hospital.

Along with the blanket will come baby supplies for a month or so to help usher these children into the world.

They are a project of our Sunday school class, one widow lady does the majority of the work, others help sew or quilt, and the entire class helps financially. 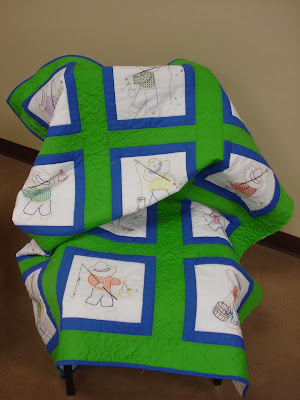 The boy's quilt is this pattern.
.
.
.
The patterns change but the color scheme is universal, pink for baby girls, blue for the boys.
.
So far this year we have given out about thirty quilt packages.

I thought I'd tell you about the rules of RUBY TUESDAY.
They are real simple:

On Tuesdays you can post any photo you like (it must be one of your own) that contains the color RED.

Then God said, "Let us make man in our image, in our likeness, and let them rule over the fish of the sea and the birds of the air, over the livestock, over all the earth, and over all the creatures that move along the ground." Genesis 1:26 (NIV) 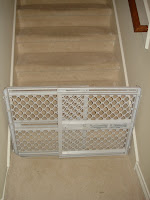 Who you say, would dare?
Would dare put up that wall?
Just a simple stair,
access denied seems unfair.

A child small you say ,
no access seems alright.
And come whatever may,
little one, no way!

No mere child I cry!
This small wee one I love,
oh dear pet of my,
sweet doggie safe nearby. 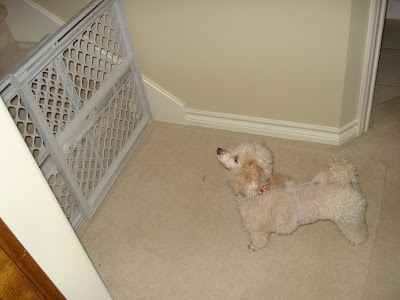