Today, March 28th, is National Something on a Stick Day 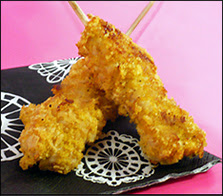 I know I'm supposed to be abstaining from blogging (my promise) for a bit but I just couldn't resist posting this. Janell, of One Square Mile, this is essentially the comment I left you this morning.

I subscribe to a 'watch your weight while eating and still be healthy' daily newsletter put out by Hungry Girl. Your eating all those candy birds reminded me of her.

Hungry Girl has a recipe for Good Chick Lollipops (link).

Who says you can't have lollipops for dinner?"

They are made from chicken breast strips, battered, stuck on a popcycle stick, and baked. That sounds really good!

BTW, I have some Blue Bunny Crunch Lite ice cream bars in the freezer to eat if Mrs. Jim doesn't make these for me today.
I must be patriot and pay respect to
National Something on a Stick Day.

My next movie to see 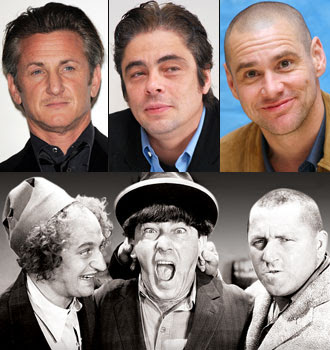 Well, I know Sean Penn and Jim Carey but I don't know Benicio del Toro (middle guy). That probably shows how much I see the movies too.

They are slated to play Larry, Curly, and Moe (the guy in the middle again??). Benicio isn't signed on the dotted line yet.

Here, with the Stooges, I don't know any of these guys as I never watched TV or went to the movies when I was growing up. At first it wasn't invented and then we didn't get it, and we couldn't afford to go to the movies. Ben Hur was my first, I went with my parents.

Mrs. Jim could drag me to something else before it comes out, which is slated for some time in 2010. I think I want to see Barcelona before we go there this April. We will have to rent that. Red Hut, here we come (maybe)!

To catch up or review the three Stooges history in two minutes, go here to the article on Yahoo.

By the way, did you see the tent city of homeless in Sacramento, California, on the NBC Early Show this morning? That's something that Bankers and us Republicans don't watch. Instead, they want to move those people along. Away from their property and banks. And watch Fox News all day long.

I am the exception, I will not watch Fox News. I can't stand the nastiness in their voice inflections and attitudes. And (another exception) occasionally I help feed these people (homeless, not bankers) at our local Salvation Army instead of spending my bonuses.

It's funeral time:
Last Friday - Mrs. Jim's first cousin, Sam B. He was 44. Mrs. Jim and I went and came all the same day to Central Louisiana.
Yesterday - Billy's grandmother, Dorothy D. Ditto the travel, to & from East Texas
Tuesday - Ken F, a member of our Sunday school class. His will be at the Veterans Memorial Cemetery in Houston.

Last week other biggies:
- GC#3, Jenna, went to NYC this weekend with her U/H business club. She hadn't been there before. She said it was nice. Need to pick her brain in person now.
- GC#4, BP, and Billy went to Florida (Disney complex) and came back early for funeral.
- Karen to London for a week on a business trip. Wow, some business!
- Mrs. Jim and I have Air France reservations. Trip planned is Houston to Paris to Barcelona. Barcelona for a week. Then back to Paris for a week in France and possibly Belgium. Return to Houston from Paris.
Thursday - played golf first time this year. Mrs. Jim plays at least twice a week. Nice to be retired.
Saturday - sold our unneeded car, the '99 Cadillac. Got a reasonable price, not real great but the car needed to be out of the driveway. Besides a ten-year old car can break at any time and the repair bill might be more than our sales price.

This week's items (planned, not done):
Sunday (done) - The funeral in East Texas. Mrs. Jim taught 4th grade Sunday school and I taught my 70 and older Sunday school class lessons in the morning before the funeral.
Today - pay bills and do mailing. Mrs. Jim plays bridge in the afternoon.
Tuesday - Jim to the SS member, Ken's, funeral. Mrs. Jim plays golf.
Wednesday - Have brunch at the club. Son, Tim's, birthday. HAPPY BIRTHDAY, TIM!
Thursday - Mrs. Jim meets with Antique Group, plays Canasta in the afternoon. Could attend "Down Under Travel" information. We don't have reservations yet. I have a 2:00 tee time (for golf).
Friday - 'Looking at the Sky' post for my P&P blog, may not do it this week. Mrs. Jim has 8:50 tee time. Evening is our group's Gourmet Dinner at a member's home.
Saturday - Car show Champion Forest in Houston. Dining In group for supper at a member's home.
Sunday - One Single Impression poem for P&P blog. Sunday school & church.

All week long or not scheduled (but on my ToDo list):
Work on my office cleanup and redecorate project.
Work through the 141 (just now's count) unanswered blog comments.
Make more arrangements for the European holiday travel.

Next week's (29th) stuff:
Nothing much out of our ordinary retired people activities. Continue what's not done above.
Our Weather for the week - highs, low 80's - 70s and lows, 60s. We think rain later in he week. Our Central Texas drought needs a lot.

If you like this I may continue for a while. I think the family likes it. They may wish to put some more of their activities here.

For updated posts please check Jim's Little Photo and Poem Place.
It will update on Fridays and Sundays and other times when I can get to it. 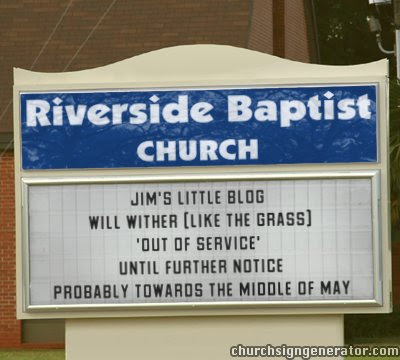 The grass withers and the flowers fall,
because the breath of the LORD blows on them.
Surely the people are grass.
Isaiah 40:7 (KJV)
I will visit my readers' blogs from time to time (time permitting).
You may leave comments here or on the other blog.

What will I be doing? Income tax; preparation for travel; travel (TBAnounced); catching up on your unanswered comments; and finishing (or attempting to finish) my unfinished tasks around here.