Feline Friday -- Alley Cat, a Cat of the Night 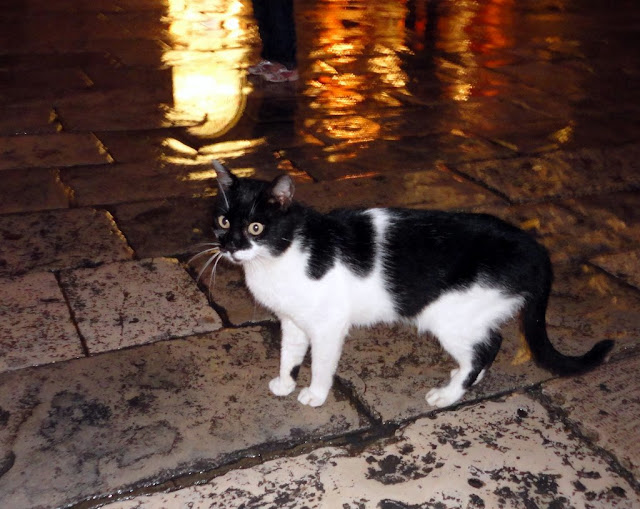 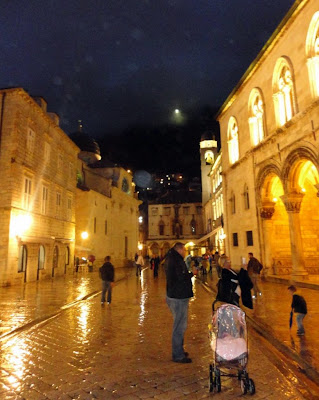 I think I startled  Alley Cat with my camera.  She is another Dubrovnik, Croatia, street cat.  One of many.

Last week I posted the Dubrovnik cat who lives in the airport terminal (link).  This one was out on the streets at night, trying to decide what to do.

She could stay out in the rain and stroll the almost deserted 'Main Street' of the old town city center.  The old town is walled and no motorized vehicles are allowed inside.

That makes for a lot of walking as the city area is quite large.  We did walk all around the city on the old wall.  The wall was built to protect the residents and businesses from unwanted guests. 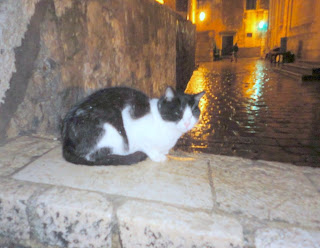 Now this sister Alley Cat decided to sit out the rain from her perch here, looking down a side street from her dry archway.  She wasn't wild at all as the Alley Cat looked in my top picture.

Instead she is a friendly cat who makes her fur shiny and her stomach round by begging food off the street and from the people eating at the outside cafes down the street from our hotel (picture 1) (picture2).

Where did we spend the night?  We had a nice Rick Steves recommended hotel, the Villa Ragusa(veview),  just inside the wall.  Our hotel had five rooms, if you decide to stay make reservations early and ask for the top room called "The Suite."  The picture on the left below is Karen's and KP's room.  All the essential were there, including the ensuite bathroom.

Oh yes, like the hotel reviewer said, the owner, Pero, did pick us from the airport and bring us back three days later.  On the way he told of his city, of his family, and gave us a lot of tips on how to make the most of our short visit.  And we nibbled on some of his mother's dried figs with a sampling of local beverages during the rest of his indoctrination at the hotel.

The view of the rest of the city below is beautiful from The Suite.  The picture on the right is the view from our room.  Mostly we look at the 'house' across the street.  But if we hung our head out and looked down, we could see the street below and a lot of orange red roofs around the town.  Click on the picture for a better look. 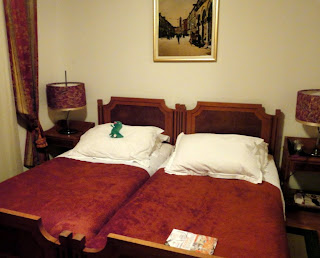 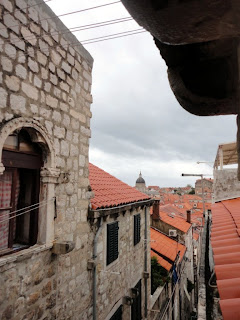 For more Feline Friday cat pictures, you can to Sandee's blog here.
Or go to Steve's at http://burntfooddude.us/ as he is the author of this meme.

— My Alphabe-Thursday, "Z" Cars I Have Known — "Z" Two Questions 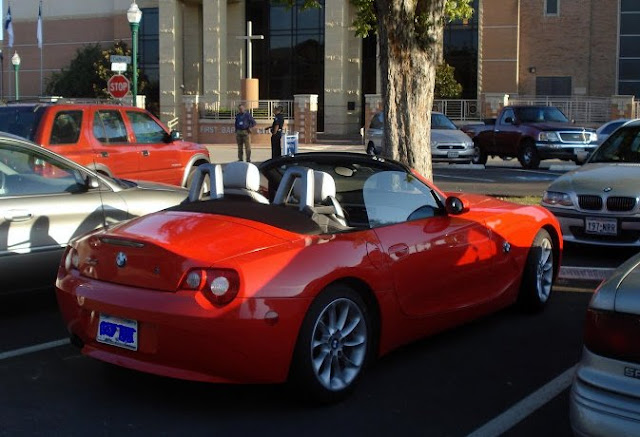 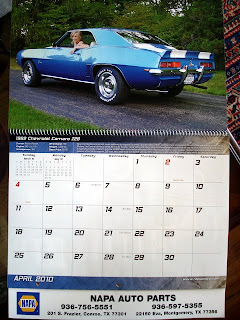 The Letter "Z" is the last letter of our English alphabet.  Strangely enough, the English do not use this letter very often.   I refer to you our English (American)  "Z".  (Google Search for "use of letter Z in british english" )

I would have picked "Z" for Zebra but I did not have a picture of one on file.  And I wasn't about to run down the 65 miles to the Houston Zoo for one.  I did try one toy store and found no toy Zebra there.

So I picked "Z" for "Z" Cars instead.  I just happened to have had a couple of blogs written about the two here.

First, above, is a BMW "Z4" Car.  The Z4 was introduced in 2002 and is still in production with an improved model. (Google Search for "BMW Z4") (Jim's 2008 blog featuring this car) BTW, this "Z" is owned by a lady friend of ours.  For this picture it is sitting in our church parking lot.

I really enjoyed your responses to my Yellow Car post of last week.  I did have a couple of Yellow Toy Cars that I did not post about.
My Two Questions for this week (you can answer just one if you wish):
..er
1. If your older relative willed you his one of his Z Cars like these above, would you want the newer BMW or the older Chevy, which would you want?  Why that one? I
It would be a toss-up for me.  I think neither car is very desirable for my wants.
. aell
2. Do you have or would you like to have a collector car?  What might it be?
I have a 1950 Ford Tudor and a 1974 Ford Mustang II Ghia. My 1998 Ford Mustang GT convertible has a few years to go before it will be a collector car.
Bonus Question: What is your favorite "Z" word?  Or "Z" Car?.

.
What does today's prompt word, hidden, really mean to Jim?  Hint: I have been feeling BLUE about it for a week now.  You've probably guessed it but please read my blog today to make sure that you guessed correctly. 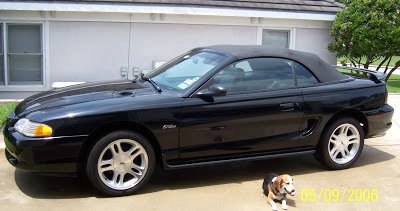 My '98 Ford Mustang GT convertible isn't hidden, it is sitting in the right hand stall of our garage.  I am not driving it today and could not drive it in the beautiful top down weather we have had since we came home from London last Tuesday.

No, it isn't hidden but it might as well be.  THE KEYS TO IT ARE HIDDEN.  Why are they hidden and who hid them?  Have I looked for them?

First of all, the keys are hidden out of plain sight so that the burglars, if any were to come while we were gone, would not run off with my Mustang.

Second, who hid them?  I, Jim, hid them.  But I have forgotten where I hid them.  Next time I will tell Mrs. Jim where I am hiding them and also write down some place where it is that I hid the keys.  I think my memory has gone kaput, perhaps from jet lag.

Lastly, where haven't I looked should be the question.  Mrs. Jim called me from the church (she has her keys, I hid my keys to her car along with my two sets of Mustang keys to keep them out of sight) asking me if I had looked in the jacket pockets hanging in the hall closet.  No, but I looked and of course they weren't there.  Plain and simple, if I knew where to look I could use my car again. 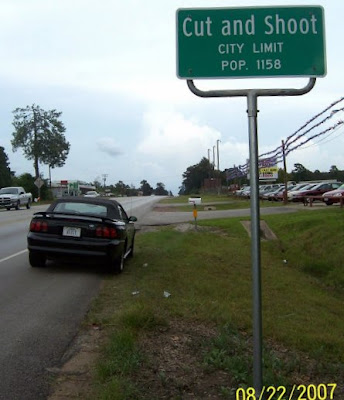 So, if I knew where my hidden keys were I could run my Mustang over to Cut and Shoot, Texas for Texas. It is only 24 miles from our home.

I have blogged about Cut and Shoot a couple of times.  You could review these posts by clicking here.

Mostly Cut and Shoot is a growth along State Highway 105 between Conroe and Cleveland, Texas.  But it is a real town.  Cut and Shoot has its own Post Office and City Hall.  It also borders on the Sam Houston National Forest.


- - - - - -
So, hidden means lost for Jim.
Also, this is Adi with the car.  She died September 17, this year.  (dear Adi)
.
Josie, who runs this meme, said: "Get ready for the next round of Two Shoes Tuesday... a place to share what we enjoy doing most... writing! Each week I'll provide a one-word writing prompt and ask you to share a short story, poem, essay, thought, or photo relating to that topic."
"The writing prompt for Tuesday, November 13th will be "hidden"! Her blog is:

So, I am really feeling BLUE today because of my hidden lost keys.

If you want to post a MidWeek Blues picture or story, go get directions from Rebecca by clicking on the logo picture on the right. She has a Mr. Linky and good directions . Just do what I did. Or you can do less. All she requires is a BLUE PICTURE or a BLUE STORY.

Homer was glad that his new amphibian was a car.

Especially since his contact had blown away. His old one, a duck, would have eaten it.

°°Grandma of Succinctly Yours Week 86 gives these directions:
°°Use the photo as inspiration for a story of 140 characters OR 140 words or less.
°°Word of the Week, 'amphibian ', was furnished by Grandma.
°°Also linked to Sandee's 'Silly Sunday #55' at Comedy Plus.