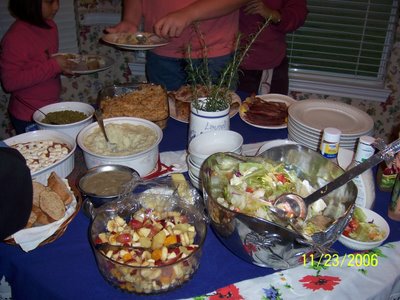 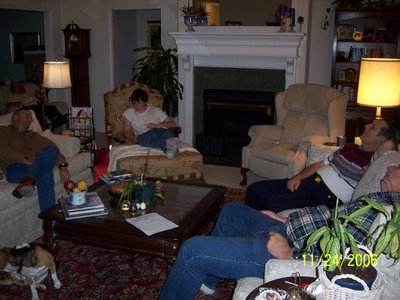 [Note this happened two days in a row,

with left-overs on the second day!]

Finally there is a hint of sense in all this patent nonsense. In my estimation big business wins most of the time because they have the big bucks to out lawyer and out court the small inventer. You might remember the poor intermittent windshield wiper control inventor (link).

The U.S. Patent office may be going to actually read these applications for patents. The rejection discussed below shows that the Business Method trying to be patented is as old as the Bible. Surely nothing new now in Joseph's old dream color robe.

Professor Joshua Sarnoff of American University just directed me to a gem of a response by occasional Patently-O reader Dean Alderucci. The Examiner rejected Walker Digital’s the pending claim 2 with the most ancient of references:

'In Genesis, Chapter 41, we are told that Pharoah appointed Joseph to be his representative and instructed him to enter into contracts to purchase grain. These contracts included an offer with an activity (supply grain) and a benefit (get paid for the grain). Payment was made upon delivery of the grain.
The story of Joseph is about 4,500 years old. . . . the principal/agent relationship is of immemorial antiquity. It no doubt predates civilization itself. . . . Many of Applicant’s [other] claims could also be rejected using the same reference.' " Patent Turkey Turkey+Picture Business Humor Bureaucracy Bible

IT WON'T RAIN ON OUR (THANKSGIVING) PARADE -- BOO MACY'S -- HOUSTON HAS IT ALL! 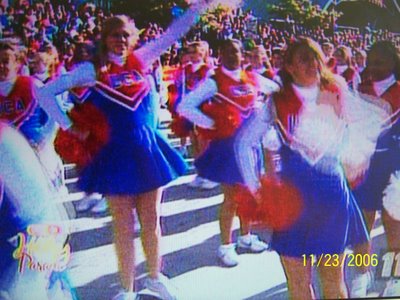 .
We have the cutest cheerleaders too! For thirty-one Houston Chronicle pictures of all the Thanksgiving Day festivities including the Uptown Holiday Lighting event and the big parade, go here.

Number 22 (link to the pictures) is an excellent shot of the H-E-B float with some nice Houston buildings in the background. It gets my vote.
. 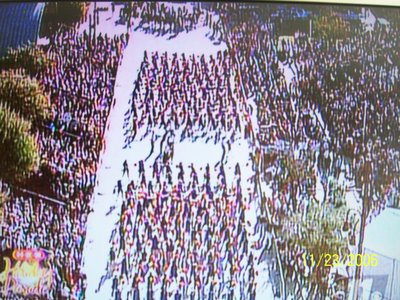 .
These are some of the 250 cheerleaders who are in this parade entry. Of course there were more than 250 others scattered around in the other school, college, and professional teams entries.
. 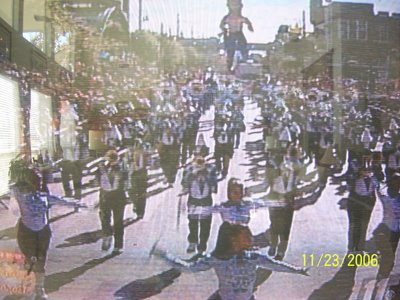 .
A typical entry is this high school marching band. No, that balloon tethered behind them isn't Harry Husker. Harry is the University of Nebraska retired mascot and he now lives a comfortable life in Nebraska. We have one of his clones in our living room.

Why did I say 'Boo Macy's?' Well they bought our Foley's department stores just like they are buying out the whole world, trying to upscale and best WalMart. Just ask Chicagoans about Marshall Fields--Macy's grabbed them up too.

The worst part of is that they aren't a corporate good citizen. Foley's was the parade sponsor for quite a spell, Macy's declined to keep up the tradition. They just didn't want to be nice to the community they are milking.

H-E-B (link), our local grocery chain, stepped and has done a lovely job sponsoring this year (H-E-B Parade link). I am hoping the community customers will step in and patronize H-E-B with their grocery shopping.

H-E-B, big in Texas, has always been community minded. Florence Butt, of San Antonio, founded the original store there in 1905. Namesake Howard E. Butt took over the family business in 1919. Butt was a devout Baptist and for ages no alcohol, not even beer or wine was sold in any of his stores (his life story here). His motto for the store was "He profits most who serves best." (H-E-B history)
.
This year we watched on TV. This is my favorite parade to attend, I love the old cars, Mustangs, Corvettes, and Thunderbirds, from some of the local collector cars clubs. Parade Life Entertainment Photos Current+Affairs Thanksgiving Macy's Business
Thank You, H-E-B! We liked the parade! 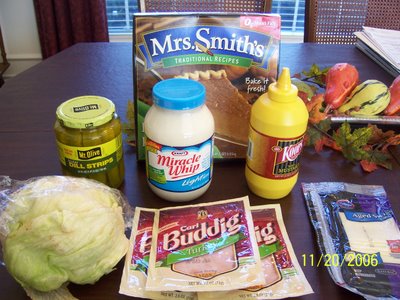 .
If I were doing the cooking, the food in the picture would be a nice Thanksgiving dinner I would cook make.

Right now I need to get more bread--whole wheat or rye--and a can of whipped cream for the pie. Oh yes, I have diet cokes. You might have noticed there isn't any dressing.

It just couldn't be simpler than that. So easy and nourishing too!
.
.
Note: I would have cranberries but a whole can is just two much for me and Mrs. Jim to eat, there would be leftovers we couldn't handle.

I'll end this blog the way it started, have a
Happy (Turkey) Thanksgiving Day!

That's because they closed this Monday, maybe forever.
.

Mrs. Jim and I went to this historic restaurant with grandkids, Megan, Jenna, and Timothy, about twelve years ago. We visited the facility in Beaumont, Texas on the way back from a nice visit with Mema in Louisiana. [link, check it out while the Web site is still in operation. More piggy icons are there as well as these two.]
.
.
.
The food really wasn't all that good. The kids had wanted to stop at a McDonald's or Burger King, stopping at the Pig Stand was something I had just been wanting to do. Of course I ordered a Pig Sandwich which they were noted for. It is a pork barbecue deal, this one just happened to be tough and not very tasty. The kids agree with me by not finishing theirs.

The original Pig Stand in Dallas reportedly is the first drive-through restaurant, starting a new American concept in take-home dining. The chain also invented the fried onion ring, a yummy chloresteral gob of fried vegetable, as most of you well know. 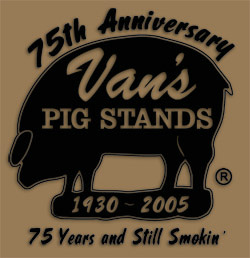 Last year they were celebrating their 75th Anniversary. (I know, the Chronicle article says they started in 1921 in Dallas.) Today they are in bankruptcy proceedings.
.
The straw that broke the camel's back was when the Texas Comptroller closed them for delinquent state sales tax payments. [link to story in the Houston Chronicle]

Those gnomes actually commandeered the three stores still open--one in Houston and two in San Antonio--and took the entire day's receipts to compensate for those missed payments.

You'd close too if you couldn't keep your income, I wonder if they took those wait staffs' tips too? 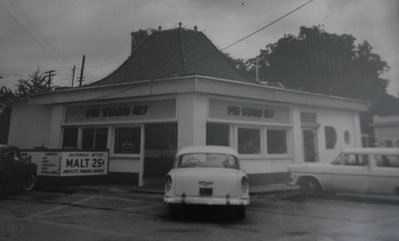 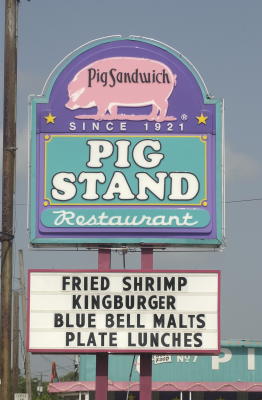 .
I like this sign, in the Fifties everyone must have wanted to stop. My 1950 Ford didn't make it there. I know it wanted to go, we just couldn't make it over there.

We could call this the Jim Bunch eating high on the hog!

Or as my Dad would often say, "we haven't eaten so good since the pigs ate my little brother." I don't know where in the world he came up with that. 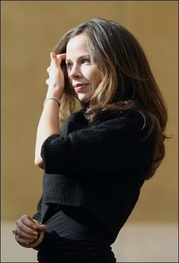 US Bush daughter robbed of purse, phone in Argentina - Yahoo! News [this link had the AP/File photo for Ms. Bush at the bottom]


"Barbara Bush's [that's Little Barbara, the pres's kid] purse was snatched at a Buenos Aires restaurant during a night on the town, but the Secret Service agents did not notice, ABC said, citing police sources.

Kim Bruce, spokeswoman for the Secret Service, which provides protection for the president and family, said: "We don't have any comment on that." "
.
Well, I have a comment. Really several. It all boils down to the fact that we have very poor security still.

I wonder what Daddy who is doing his world travel thing right now thinks about this?
Bush Security President Life
Do you have any doubts but what any member of the presidential family is absolutely safe? They could have kidnapped or killed her just as easily.

Something for high school kids? 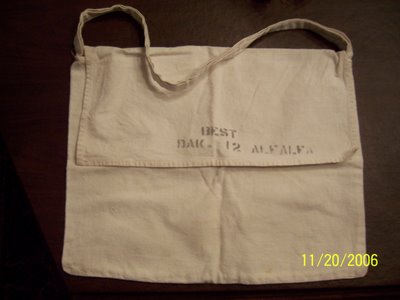 .
Any idea what this is? A modern high school kid wouldn't be caught dead with this.

My mom made this knapsack for me out of a feed sack so I could carry my books back and forth to high school when I was riding my horse. That was over fifty-five years ago. Antique Antiques Photos Life
.
.
.
Note: My Google search - "best dak 12 alfalfa" - did not match any documents.

Sat Nov 18, 2006
From: BraShop
Subject: jxxyyzz@yahoo.com, Your Victoria Secret Gift Card Expires Tonight
3k
My comment: Too bad, I didn't open the e-mail until Sunday. Also, that Gift Card sure was a Secret, I didn't even know about it.

This means I'll have to pass on both these tremedous deals. Any takers?

What junk e-Mail or Spam did you get? 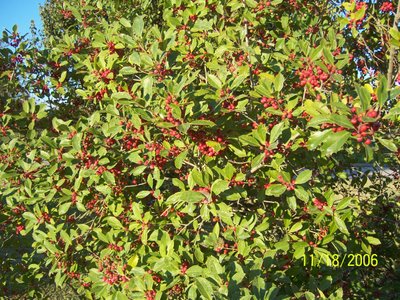 . [click on the pictures to make them full screen]
.
It was you who set all the boundaries of the earth;
you made both summer and winter.
Psalms 74:17,
New International Version (NIV Bible).
. 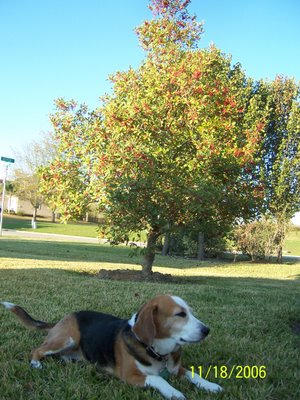 That's our Savannah holly tree growing in our front yard. When the weather turns cold the berries turn red.

It was cold yesterday, down to about 33; a lot of winters we don't get colder than that. This morning I could see my breath.

16 The day is yours, and yours also the night; you established the sun and moon.
17 It was you who set all the boundaries of the earth; you made both summer and winter.
18 Remember how the enemy has mocked you, O LORD, how foolish people have reviled your name. Savannah+holly+trees Savannah+holly Photos Christmas Life