In the South, y'all is singular; all y'all is plural.

Got this blurb this morning by e-mail:

"In the South, y'all is singular; all y'all is plural."

Mrs. Jim says that isn't right, y'all is plural in itself and you don't have to say all y'all. South Southern Education Life

Her southernish never has y'all for singular, because all is plural. I don't argue with Mrs. Jim about Southern things because she is from Louisiana.

Any thoughts here? If you aren't a Southerner, your opinion will be somewhat discounted. 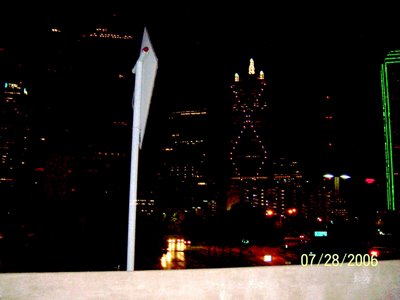 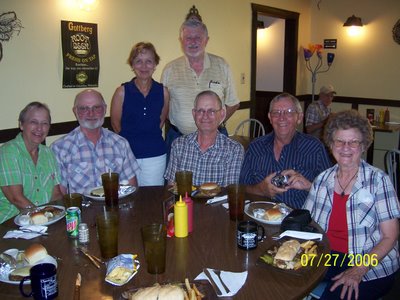 .
Another Jim Bunch Eating picture.
We were all assembled for a short evening at the The Edge in Tekamah, Nebraska. From left to right: Cousin Jack and his wife, Linda; (standing) Jim and wife, Mrs. Jim; Cousin John; Cousin Jean and her husband Dwain. I just realized, we are the four "J" cousins. Five other not "J" cousins live in Arkansas, Iowa, Nebraska, Missouri, and Colorado. Maybe soon all nine of us can get together. That hasn't happened since right after World II at a family reunion. One other thing, Tekamah, Nebraska, is Cliff Morrow's home. He lives about nine miles east of town. We just didn't have time this evening to connect with him. We wished we could have called, but time just didn't allow, even the cell phone didn't cooperate that way. Sorry Cliff, but don't you dare sneak into Houston without letting us know. We left town for another year or so at about 10:00. On the way to Tekamah we visited Dad's farm; I will post some pictures of the homeplace from time to time. His farm is about ten miles southwest of town.

What color is Iowa? 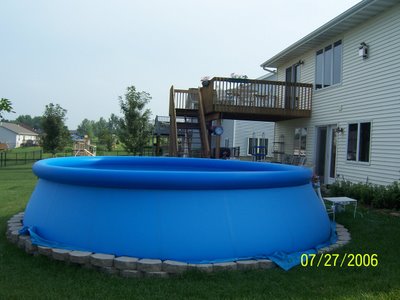 .
Well, here's proof it is turning blue. These things are popping up all over the countryside.

This is another invention they didn't have when I was growing up. I sure wish I had the patent on this creature of fun for kids.
. 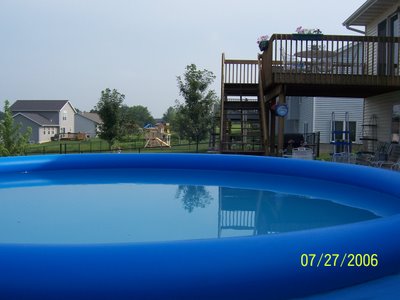 .
No, it's not an underground nuclear plant, it's got water. Maybe blue water.

Now where are the kids?

My most popular Google searches (Top Ten List, Part II) per my Site Meter - - - with a new Ugly Foot Contest winner at the bottom

9. Runza Hut goes here. I come up second with a Runza Hut Google.

10. (tie)Jim Greeley Alaska, amongst others about Alaska, brings up the Bad Ass Coffee thing. Googling 'Bad Ass Coffee' won't get it, even in a Google Blog search. It does fine on a Blogger 'all blogs' search.

10. (tie)Brown June Bugs. Is there a secret use for these critters that we aren't aware of? Or anything we need to know here?

12. (if there could be one)Bedbug Attacks. People get here in various ways, and generally not in the top 10 first Google page.

14. (no number 13, I'm not superstitous, someone reading might be) Seymour Weaver and Woodlands. (link to blog info) Dr. Seymour Weaver is my dermatologist at The Woodlands, Texas (unincorporated, larger than Conroe, and has a Conroe mailing address). He is on this year's Texas Super Docs list in the Texas Monthly Magazine. I didn't choose him for that reason.

15. Six Day Underwear. There are all kinds of blogs and Web sites about this. Mine has the true story, I was there back in the 80s when those engineers invented it. Blogging Google

16. Harry Husker Mascot. Or you could Google lil red husker mascot, by both do really good. Mine will have a rundown of the history of the three Husker mascots.

Google these words to see what you get. If there is a problem, add the word 'blog' or do a Google Blog search.

Under "details." you should be first on the list (your URL, location, and referral). Feet Blogging Foot+Pictures Site+Meter Ugly+Feet Photos Ugly+Foot Pictures
How about you? Do you know yours? You can get a Site Meter (free) and check up on who's visiting. 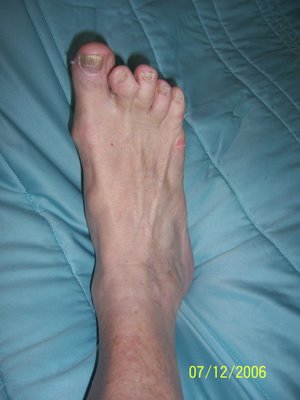 A Nice Castle Anyone? 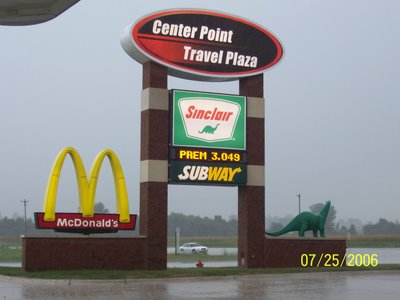 .
Well, here I am at the Center Point Travel Plaza again. I was getting gas when I took this picture. Premium, our car drinks that, has gone up another nickel to $3.04. Yesterday it was $2.99.

It is $3.13 over in Cedar Rapids at the same type stations. I wonder if this new truck stop/travel plaza is trying a WalMart thing with the locals? The free wireless is nice, and the only one in town.
. 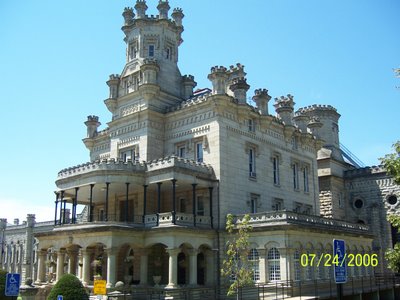 Yesterday was a nice tour of the Cedar Rapids area of Iowa. Bro-in-law, Jim, did the driving.

Our first stop was Stone City. They had two large quarries with a lot of cut out rectangular stones laying around. All of them were a darkish brownish beige color.

Originally most of the houses were made of these stones also, but now mostly just the older homes were stone. A few trendy new ones were too.

Next stop was Anamosa. Lois wanted to show us the castle. She has always like houses with turrets at the corners, so this was what I had envisioned. This one looked pretty elegant.
. 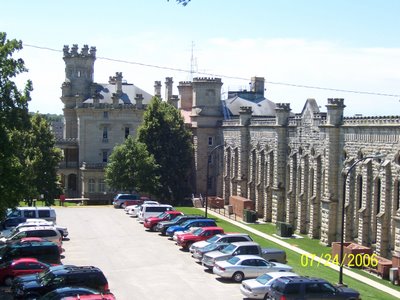 Not so. Here is a quick look. Doesn't it look grand! Upon a drive-by inspection, it seemed like a fun place to live. The stones were all from Stone City.

Some of you might know, but this really is a prison; the Anamosa State Prison. Lois didn't know how it might be for escapes, but it looked pretty solid to me. Not a place I would like to be in for keeps. 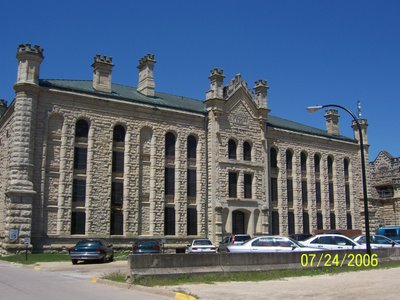 This pretty building was once the woman's residence. They have since moved to other quarters here in the compound. Looks like a stately sorority house, doesn't it? 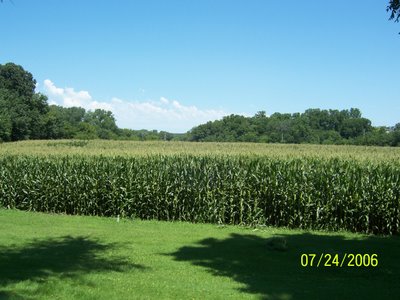 .
Next was the state park adjoining Anamosa. It was all very pretty, sort of rustic. Like the little mouse who only saw the mouse under the queen's chair, I was seeing this pretty Wapsipinicon River bottom corn field. Texas corn doesn't get much taller than this.

Tonight will be the Jim Bunch Eats Again. Jim (bro-in-law) is grilling hamburgers and nephew and greats are coming over. I think Mrs. Nephew won't be able to make it. Perhaps I'll take a picture for us.

Our day in Cedar Rapids 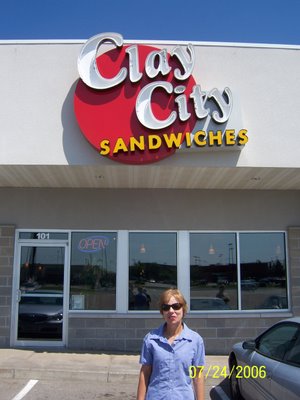 .
One of our objectives today was to eat lunch in Cedar Rapids at Clay City Sandwiches. We all ate very nicely, I had a Rueben sandwich, a salad, and some Diet Pepsi. Mrs. Jim had Wisconsin Cheese soup and a salad (plus a fourth of my Rueben).

Clay City Sandwiches is owned by Seeker's (link) niece, Hannah, and her husband. Neither of them were in today, but Seeker's niece, Liz, was there. Liz is a nice young lady who spoke highly of her aunt (Seeker). Seeker blogged some about her kids and the restaurant on . (link)
. 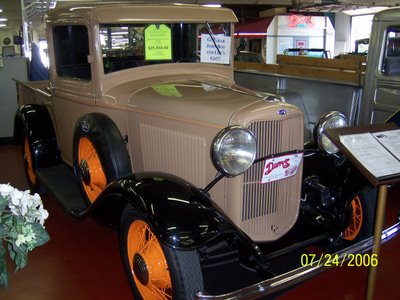 Duffy's Collectible Cars was our next stop. Bet you have trouble figuring out who organized this part of the agenda? I liked this 1932 Ford Model B Pickup truck. 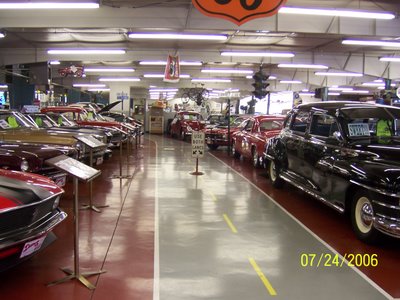 Mrs. Jim liked the 1946 Chrysler on the right here. It was a very plush car, complete with a crank-up window between the front seats (chauffer?) and the rear passengers. 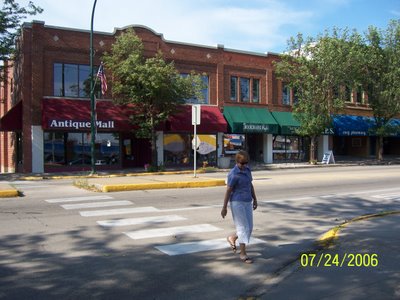 No trip to Cedar Rapids would be complete without stopping at the Antique Mall in Marion. Mrs. Jim was the last to finish, however she did meet us at the appointed time.

You can see she was watching for cars as pedestrians don't seem to have the right-of-way in the Marion crosswalks. 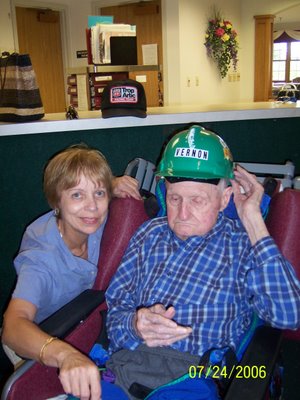 Our final stop was in Hiawatha to visit Dad. You will remember he is 96 years old. Here he is wearing his hard had. The Red Hat Ladies and the Construction Men have taken the home as their community project.

Maybe Dad would rather be wearing his Phillips 66 Trop Artic Racing Team hat. After the big merger this hat is probably a collector item.

Our supper was at Lois' home; ham and cheese sandwich, potato salad, cottage cheese and chips and chili cheese dip. The sandwich bread was Old-Fashioned German Black, made by the Amana Society Bakery.

We have a box of Krispy Kreme donuts and some Pralines and Cream ice cream waiting for our bedtime snack.

Adi will get ice cream, but no donuts. She is on a Jim imposed diet. I wish I could impose that diet on me. 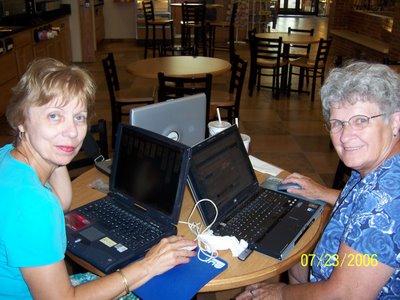 .
On the left is Mrs. Jim getting ready to check her e-mail and visiting with my sister, Lois. We are at the Center Point, Iowa, Travel Plaza. Mrs. Jim is waiting for her computer to lock onto the wireless, Lois is watching me uplink a picture for the blog.

With a little encouragement, she might become a blog owner/writer. Her most significant question was how hard is it to get a picture uploaded to a blog. Second on the list is how long does it take to learn how to do it. All easy stuff, when it all works.
. 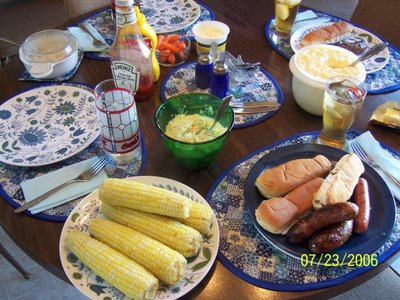 I tolk a few of you I would soon be eating sweet corn, i.e. roasting ears, either in Illinois or Iowa. Well, here the corn ears are in Iowa.

Lois cooked up five ears, one for each of us and then an extra. We also had brats (brother-in-law, Jim cooked them outside on the grill), potato salad, cole slaw, and lemon pie. Drinks varried, I had pink lemonade.

Lois was full of questions today. Her suppertime question was "how do I like to eat my roasting ears?" 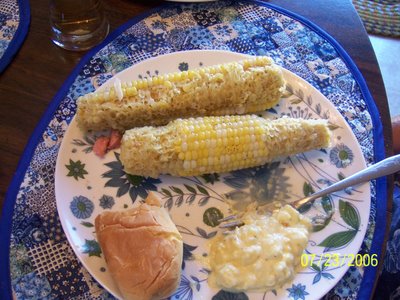 Of course there are only two practical answers to that question. Around and around (round and round) and up and down.

It turns out that Lois eats hers round and round, I eat mine up and down the ear.

I think Mom ate hers round and round while Dad ate his up and down. Maybe it is a male female thing? Mrs. Jim eats hers up and down the ear, so that wipes that male female stuff out.

How do you eat yours. Any good reasons? [I just like the way I do it.]