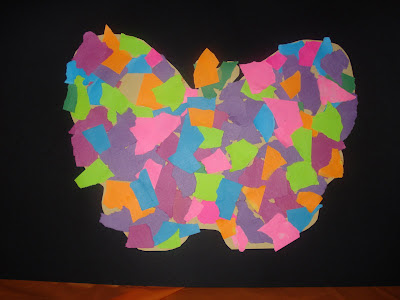 Let me tell you about my operation 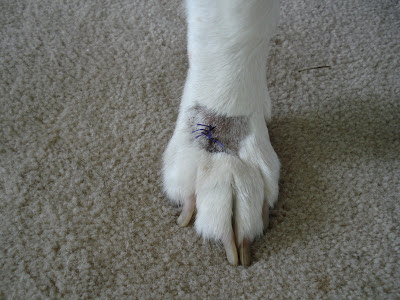 It all started a few of weeks ago. Jim had given me a bath and was drying my feet.

Then he gave my right paw a big squeeze and talked about a tick! I almost panicked, "A tick! A tick! O my goodness (OMG stands for this in Jim's house)! A tick!"

Mrs. Jim was called, partly because Jim was hurting my paw and partly because he didn't have his glasses on. Mrs. Jim said, no, that wasn't a tick. "TYG! (Thank you goodness) I hate ticks."

It isn't the ticks I hate so badly, it is the pulling of them off. Invariably the head, full of blood, stays in my bod. That means get out the hot matchstick ends to burn them out and to burn them dead.

You see, ticks will live without a body and just work their way further into your skin. Sucking blood as they go.

If it wasn't a tick, then Jim said we would get Dr. Hablinski have a look at it. We went right away that afternoon. Dr. said it wasn't a bug or a boil, but it looked like I had another tumor (link to the last one).

Since it came on so soon after the last one, he wanted to take the tumor off. And while it was going off, I would be asleep and he would like to clean my teeth too. We made an appointment for May 1st.

Along with the appointment was a package of 18 pills, with the directions to take two a day starting five days before my surgery. Jim said they were 250 Clavamox, an antibiotic to stave off infection of my heart. I have a heart murmur of 'two.' (Jim takes Amoxilin before his dental procedures too, he has a 'double heart murmur "of two" scaled.') 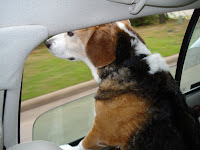 . . . . . . . [large picture] [super sized]
I really enjoyed my car ride, but then I saw we were at my vet's office. Now I like Dr. Hablinski a lot, but just a lot of times they mess with my body and I don't like that. I don't like shots either, but there were no shots today (while Jim was there). 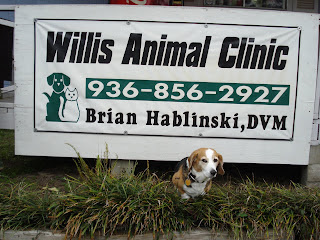 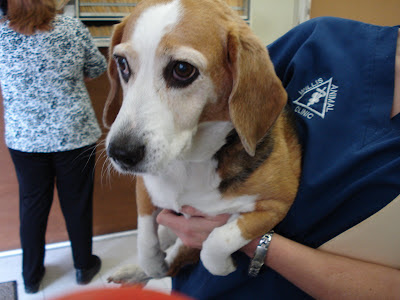 "It won't hurt, sweet heart
She's a nice lady, she likes puppies
Everybody here likes Adi
You'll be all better real soon
I'll come to get you in just a little bit" 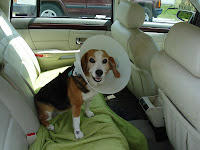 But, did they hurt me? It must have hurt because look at my foot and all the stitches they put in. And clean your teeth? Of course that hurts.

Only thing was, I really didn't feel a thing after the needle stuck me. Yes, there was a scary needle and it didn't hurt like it looked. In fact, I was so at ease that I slept a lot.

When I woke up, it was all done. I heard them calling Jim to come get me in about half an hour.

He got right over here. Was I ever glad to see him. They said I ran all over the vet's waiting room and into the first observation room for quite a little while. Then I settle down in time to hear that I would still have to take my antibiotics 'til they were finished, keep the halo on for ten days and AFTER the stitches were removed, and cool it for the rest of the day on half rations. Boy! A poor doggie girl isn't even supposed to eat much after a grueling ordeal like this. 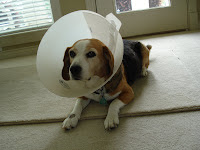 So I lay around this retirement house with Mrs. Jim and Jim. We did go for a go golf cart ride one day to get the mail. I think we will do that again today.


The cyst? Doc's office called this morning and left a message, THEY were all gone. It was an "abnormal benign tumor." That is good news but we will ask but I think some bad because it was a tumor and not an ordinary cyst.

Fifty years (plus) ago today 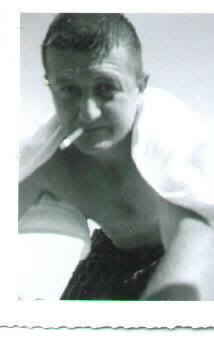 I went into the U.S. Army and stayed there for five years. My first two weeks were at Fort Chaffee, Arkansas, all the rest was in Texas. 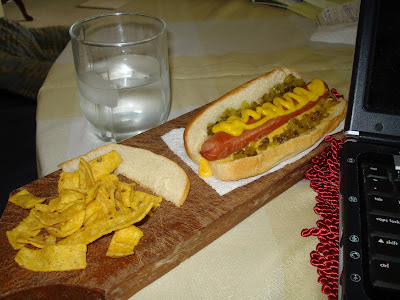 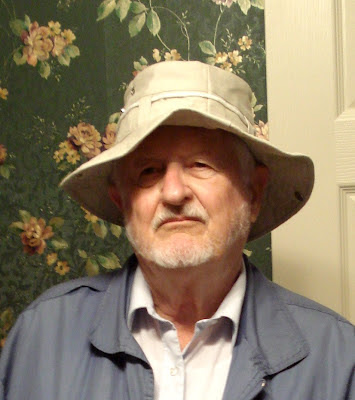 Your favorite Mexican fellow?
Can he sing?

..
Things I learned from reading the Houston Chronicle today (5-5-2008:
1. April, May, and June are girl months, they hang out together.
Family Circus comic strip

And they're off! Running the race set before them! 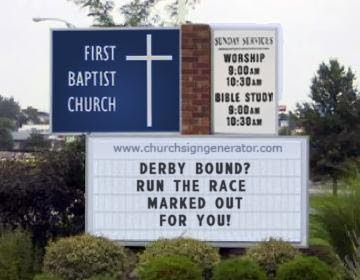 Derby Day # 134 at Churchill Downs in Louisville, Kentucky. One and a half miles.

Did your horse win the Kentucky Derby? I hope so, especially if you had a wager on him. And if he finished but didn't win at least he/she set the race set before him/her.

Are you running a good race? Do you run the race set before you? 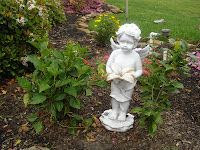 Paul (??) had these words for his fellow Christians: [large picture] [super sized]


1 Therefore, since we are surrounded by such a great cloud of witnesses, let us throw off everything that hinders and the sin that so easily entangles, and let us run with perseverance the race marked out for us.
2 Let us fix our eyes on Jesus, the author and perfecter of our faith, who for the joy set before him endured the cross, scorning its shame, and sat down at the right hand of the throne of God.
3 Consider him who endured such opposition from sinful men, so that you will not grow weary and lose heart.
Hebrews 12:1-3 (NIV)

And in a race, only one gets the prize!

So then, in Paul's words about running the race to his fellow Christians at Corinth:

Adi and I were late going over to Jamie Dawns blog church. We couldn't sleep after 3:21 this morning so went over early. Adi is Sergeant at Arms, aka Mascot, there and was needed this morning when we arrived. There was almost udder chaos!

Jamie did show this nice video that I could relate to. The Watch Maker is good for kids. I once belonged to the Elgin National Watch Makers Union of America so it appealed to me. Go see this short video, I recommend it.