Have you had your car read lately? #009 -- A Moscow (Russia) police officer WAS driving this car -- and PETA outrage!

but it stopped. Right in the middle of the street.
.
PETA News Flash:
I am dropping my membership in PETA. Of all the crass things to suggest, PETA is wanting the ice cream manufacturers to switch to human breast milk and leave those poor cows alone. They are starting with Ben & Jerry Company.

"The breast is best! Won't you give cows and their babies a break and our health a boost by switching from cow's milk to breast milk in Ben and Jerry's ice cream? Thank you for your consideration." [PETA (Sept 26, 2008) news release link](or here)

I grew up on a farm, it sure wasn't torture for those cows to be milked. They were very much relieved of their swollen udders full of milk. Almost too heavy, as to hurt when they walked. Besides they were fed nicely when while in their stalls and we were milking them.

[I was wrong about this, it was a 'dead heat'. The seventh round? Palin went down for that one, I thought it was going to be a knockout. A hockey-mom came to her rescue with some smelly salts. I did come to respect Joe Biden, he is truly a gentleman. Subscribe to his newsletter here.]

Wednesday: Our friend had outpatient surgery yesterday. Mrs. Jim and I drove him in, waited, and brought him and his wife back home. He's doing fine now. 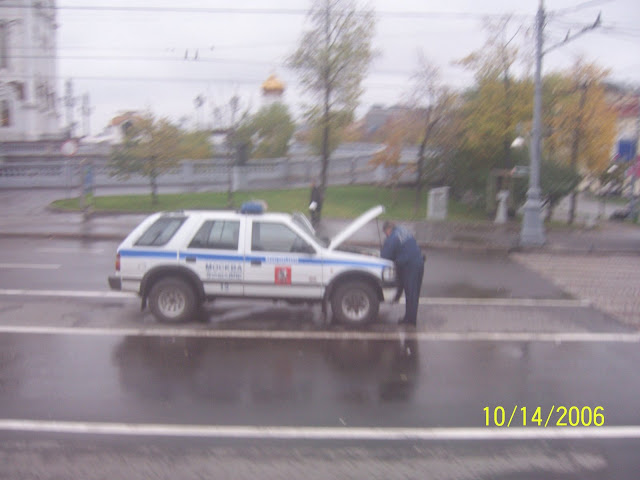 The driver of this car is obviously embarrassed and very likely a little frustrated. This may not have been the first time he has been stranded given the reputation of Russian cars. That is if the car is Russian made, I am not familiar with this model and cannot identify it.

I am sure he is a family man, a nice man, and doesn't swear. That is the norm for police officers.

He is probably feeling helpless when thinking of getting it to run again himself. I am sure help is on the way as this is a very busy street, even though this was taken on a Sunday morning.

Why did I post this picture and the gentleman? Because it was the only way I could work this one in, it just wasn't good enough quality to be included in my Russian tour blogs.

Word for the day: HEAD-MONEY
Devil's Dictionary: n. A capitation tax, or poll-tax. (The first year I came to Texas I had to pay one in order to vote. I did.)
Urban Dictionary: HEAD-CHEW (HEAD-MONEY not defined yet) A very painful headache. Comes from the mountain region of Montana where bears often chew the heads of men.
"Stop yelling, I have a bad head-chew."
"Why are you crabbie, is it a head-chew?"
The Free Dictionary: n.
1. A reward paid for the capture and delivery of a fugitive; a bounty.
2. A poll tax.

This Friday feature for JIM'S LITTLE BLOG helps me tackle the blogging problem of writer's blahs. So my advice is "when you don't feel like writing anything, post a picture." That's what is happening here.
..
This is not an original idea. Reading cars came from a sermon I heard one Sunday, brought by Dr. Roger Yancey, Director of Missions, Tryon Evergreen Baptist Association, of which our church, First Baptist Church of Conroe Texas, is associated. I believe my count of 118 was pretty close (Google that to check yourself).
I saw a few cowboy churches and quite a few Hispanic churches. All are within a 35 mile radius of our home.

Wednesday (cat sleeping in picture below):

Let sleeping cats lay -- Tomorrow they may have a busy day

Yesterday: Consensus is to keep the little red desk 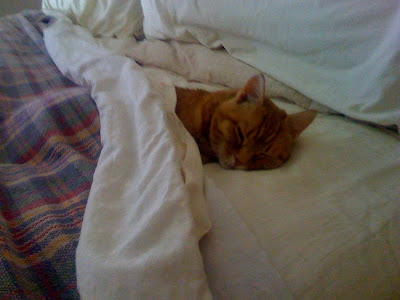 .
This is Karen's cat, Amber. It was sleeping on her bed, just minding it's own business.

Karen is a little mischievous sometimes, this time she put the cover on thinking Amber would wake up and get up. That didn't happen, Amber wiggled and settled in for the finish of her nap.

Amber was rescued from Karen's friend. The cat was used to being a house cat but for some reason that I can't remember Amber was required to become an outside cat.

Neither the friend nor Karen wanted that so Karen has now has Amber. Amber is back to being a house cat. That cat is really spoiled. We tried to unspoil her while we kept her for a couple of weeks. (link)

I did teach her to come when I called and to sleep in her own bed at night. Her bed was right beside Adi's bed, both were right beside our bed.

The cat in this YouTube video is NOT AMBER. This cat seems to be much younger than Amber who is about 16 years old now.
.

If the YouTube doesn't work then click here
.
Word of the Day:
Devil's Dictionary: KILL, v.t. To create a vacancy without nominating a successor.
Free Online Dictionary: KILL, v.t.
1.a. To put to death.
1.b. To deprive of life: The Black Death was a disease that killed millions.
2. To put an end to; extinguish: The rain killed our plans for a picnic.
Urban Dictionary: KILL, #21 of 30 - stop, get rid of, make go away
Why isn't the Tylenol killing this toothache pain I've had since last Sunday? 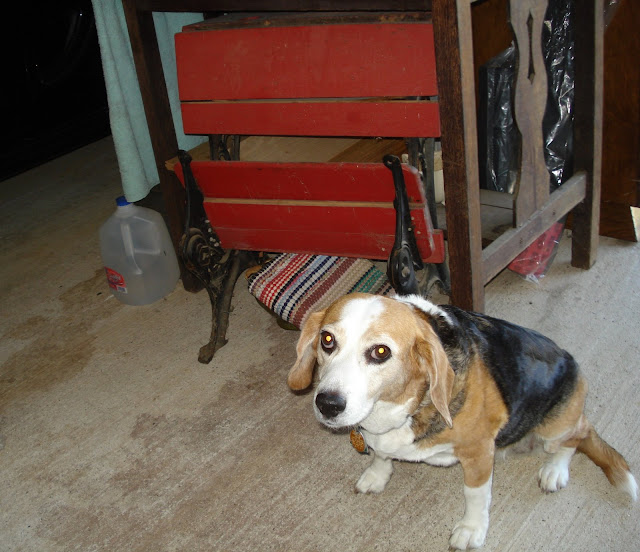 Wine for the Day: Palin Syrah, sales are up in Houston

This old desk was the first antique we acquired after we were married, 37 years ago. We debated about the $15 price tag and finally decided it would be worth it.

The desk no longer had its original finish but had been painted this red. It was a little brighter back then but it dulled considerably since the flood of 1979. It was completely submerged with about three feet of water, as were three cars and a motorcycle and most of our other worldly goods.

For a while it held flowering potted plants on our patio. That was really nice for it, I'm sure it felt it had a new life.

For a while we sat things on it but now due to space limitations it sits under this other older table. We do have two other student desks with original finish, carvings, etc. One is in good shape, the other needs some glue here and there.

I suppose it will sit for a few more years, then hit the trash. That is usually what happens to old things, sooner or later.

Of course, since we have an open back porch on our retirement home it could hold a plant back there again. It hasn't for nine years, will things change?

Word for the day: kerfuffle
Free Online Dictionary: Noun - informal a noisy and disorderly incident [Scots curfuffle, carfuffle]
Merriam Webster On-line Dictionary: noun - Etymology: alteration of carfuffle, from Scots car- (probably from Scottish Gaelic cearr wrong, awkward) + fuffle to become disheveled - Date: 1946 - chiefly British : disturbance , fuss
Devil's Dictionary: Not listed
Urban Dictionary: A social imbroglio or brouhaha. An organizational misunderstanding leading to accusations and defensiveness.
I spend half my time these days on the phone with HR, ever since Bob started that kerfuffle with his flaming e-mail to everyone in the sociology department.

The secret to a lower golf score
is to play fewer holes.
(Alieve TV commercial)

I press toward the mark for the prize of
the high calling of God in Christ Jesus. **
[click any picture]
[for large sized]
.
. 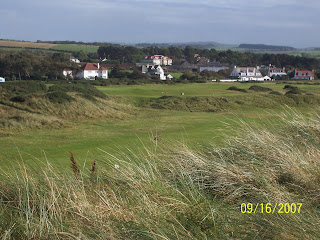 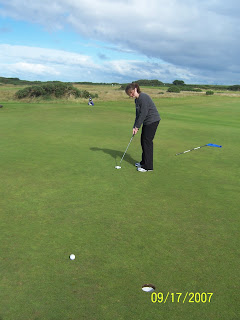 Photos taken at the The Westin Turnberry Resort, Scotland (link)
. 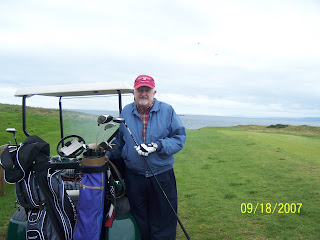 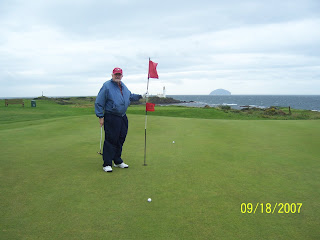