I did a Google on "Jim does" (link)
to see what I have been doing lately.
I call it doing a self check.

So there. Only one was derogatory (# 9), and if you read between the lines you will see that I am a really busy guy!

I'll bet your write up wouldn't be nearly as flattering as mine was!

Someone's been sitting in my chair, and there she is 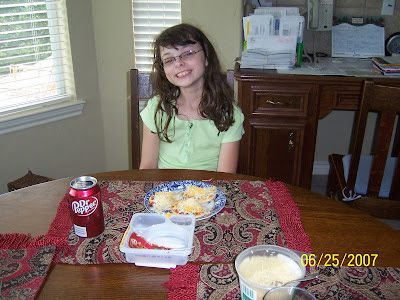 .
This GC#4, a.k.a. BP (link). She was visiting us this week. It is a tradition, she came last summer for a week too. The timing is just right, it is Kid Kamp time at our subdivision.
.
This generally where I sit at the table to eat. When GC#4 comes, she chooses this place. She also likes my recliner. This year I would get it because my hurt knee likes to be elevated.
.
Come to think about it, Mema (link) liked these spots of mine also. I must have good taste.
. 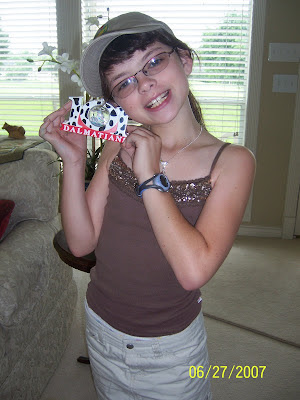 .
Only Rachel (link) could know what this is about. When I did my leprechaun June Bug post (link), I showed GC#4 with the collection and mentioned the are all presents, just in case a reader had one collecting dust.
.
Rachel had this lovely Disney 'Dalmatians' dated, 1996, globe to send to Texas. It was most appreciated, as you can see.
. . 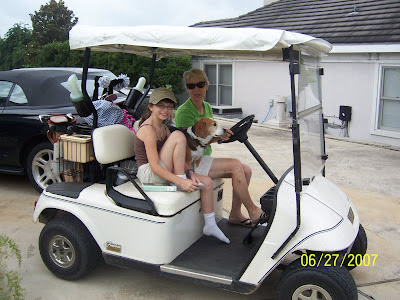 .
Here are Mrs. Jim and Adi. They are taking GC#4 to Kid Kamp. That camp is one BIG reason she picks this week. Adi likes to run alongside the golf cart but this day it was mostly riding.
..
Yesterday, for the first time since mid-May, I drove that Mustang. It won't last long though, I am scheduled for kneecap surgery Monday (12 noon CDST).
.
I took it to the Houston Medical Center for my annual 'nuclear' stress test. My cardiologist wouldn't clear me for surgery based on last July's tests. Needless to say, I passed with flying colors.
.
I get to drive it again for my Friday hand therapy too. Today for the first time I could touch the palm of my hand with the OT stretching it there. That is progress, I need that for my golf grip.
.
- - - - - - - - - - - - -
..
Oh yes, we all went to see the Evan Almighty (link) movie. We all liked it a whole lot. Speaking of lots, a lot of it was very predictable.
.
I say, GO SEE IT.

Guess what is Jim doing? Hint: he is at a famous castle These people are waiting in line to do it too! 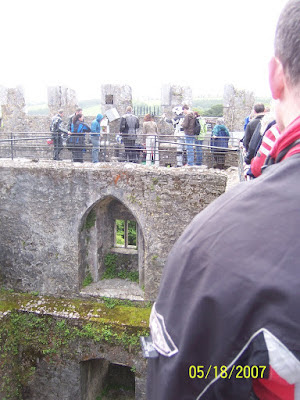 To find out what is going on, high-lite (with your mouse, hold the right button and drag across) the open space between here and
He is between Kilarney and Cork, Ireland, at the Blarney castle. You know what he is doing there, he is kissing the Blarney Stone. This endeavor is kissing the stone endows the kisser with the gift of gab (great eloquence or skill at flattery)[Wikipedia link] [Sacred Sites link].
I think this is all Blarney.
here. 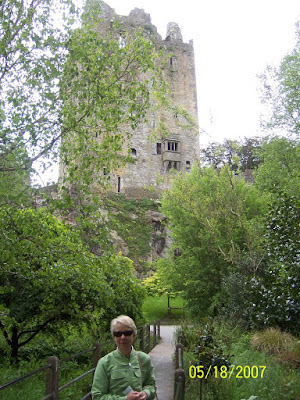 Mrs. Jim will go up there too. But she didn't want to kiss the stone. 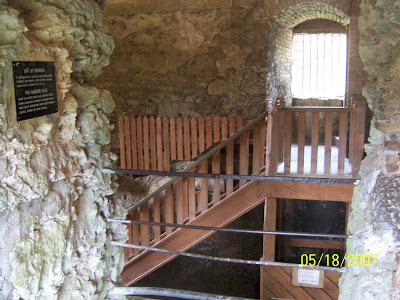 This is the murder hole. French castles have them too. Read the sign from the picture below. 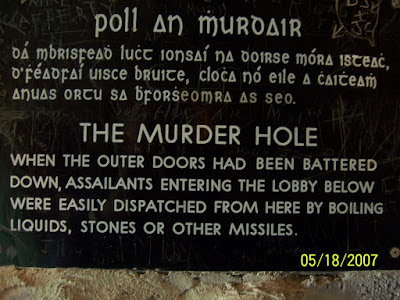 'Nuff said. In case you want to practice up on the Irish language, read the top part. 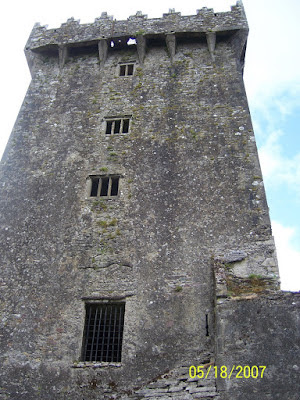 That opening at the top is where the Blarney stone is at. Someone is scrunched down there right now kissing the stone. 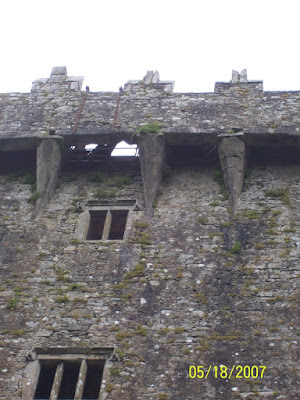 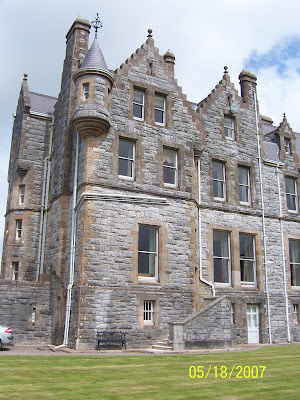 This is the current castle owner's home. We were allowed a tour of the 'mansion' but no picture taking was allowed. The home looks like a castle, but is not. Just a very fine home. 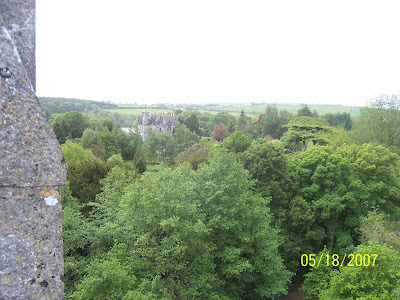 View of the mansion, grounds, and surrounding countryside as seen from atop the castle. 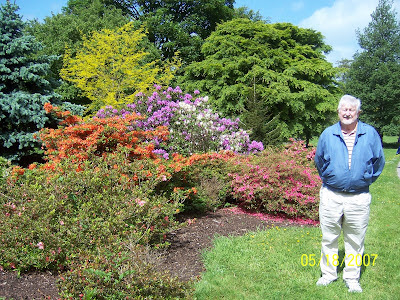 The grounds were very well kept and landscaped. I particularly liked the pretty spring flowers.

One last view. The round structure is what is left of one of the look-out towers.
.
.
Notes: [from Ireland Information 07 (link for this and more)]
.
History of the Castle
Blarney Castle was originally a timber hunting lodge built in the 10th century, which was replaced by a stone castle in 1210. The present day construction was completed by Dermot McCarthy, King of Munster in 1446. The Castle remained the ancestral stronghold of the McCarthy family until the arrival of Oliver Cromwell with cannon guns in 1646. Fifteen years later with the arrival of King Charles II on the English throne saw the return of the McCarthys to the Castle.Following the Battle of the Boyne in 1690, all Irish chiefs were stripped of their powers and the McCarthys were again forced to leave Blarney Castle. The Castle was sold to Sir James Jefferyes, Governor of Cork in 1703. The Castle is now owned and managed by the Trustees of the Blarney Castle Estate.
.
Kissing the Blarney stone
The world famous Blarney Stone is situated high up in the battlements of the castle. Follow one of the several long, stone spiral staircases up to the top and enjoy the spectacular views of the lush green Irish countryside, Blarney House and The Village of Blarney.The stone is believed to be half of the Stone of Scone which originally belonged to Scotland. Scottish Kings were crowned over the stone, because it was believed to have special powers.The stone was given to Cormac McCarthy by Robert the Bruce in 1314 in return for his support in the Battle of Bannockburn.Queen Elizabeth I wanted Irish chiefs to agree to occupy their own lands under title from her. Cormac Teige McCarthy, the Lord of Blarney, handled every Royal request with subtle diplomacy, promising loyalty to the Queen without "giving in". Elizabeth proclaimed that McCarthy was giving her "a lot of Blarney", thus giving rise to the legend.You too can acquire the gift of eloquence by kissing the stone!
.
Blarney House and Gardens
Blarney House is situated 200m South of Blarney Castle and was completed in 1874. The house is open to the public during the Summer months only. It has been completely restored over the past few years. The house is surrounded by extensive lawns, shrubs, trees, and flower beds. These slope gently towards the lake. 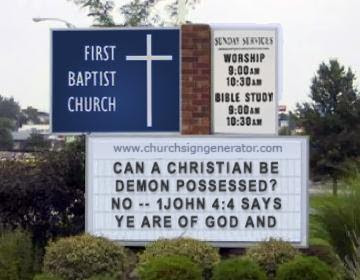 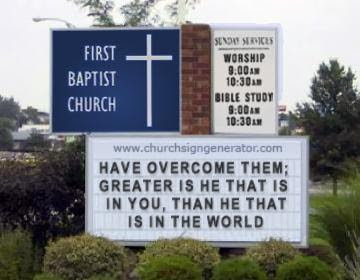