The Jim Bunch eats some more, here are a few pictures and some words

It is time to catch up with some eating pictures that might not otherwise get posted.

You have seen some eating times during this time span, but not these. We ate other times and I have dish pictures, but not people. Then of course, Mrs. Jim cooks a lot and her meals are delicious. So we are not starving at all. 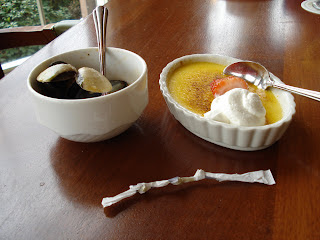 [large picture] [super size]
(March 3)
No table picture here. We were eating at one of our club restaurants with our friend from Maine.
I have been known to have a three-desert dinner, this night it was only these two. 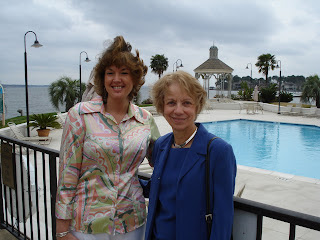 [large picture] [super size]
(March 3)
This is Ahnon from Maine. She was enjoying our South Texas weather, and our nice Texas food. While Ahnon was here, we had the nice buffet at the club, Tex-Mex, seafood, and BBQ.
Mrs Jim cooked a nice meal for Anon and a neighbor widow lady.
We also ate at this club one other time with the two ladies and two other couples. 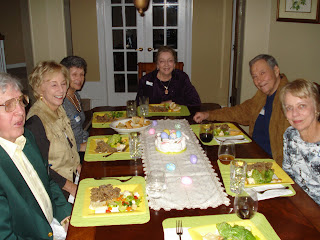 [large picture] [super size]
(February 23)
You are seeing half of our Bentwater Gourmet Dining Group. The other half was eating in the next room. This year we have fifteen groups of four couples each. We all have the same menu prepared by the menu committee.
We meet at one of the couple homes, doing this three times a year followed by a nice Christmas party where all the groups can get together. 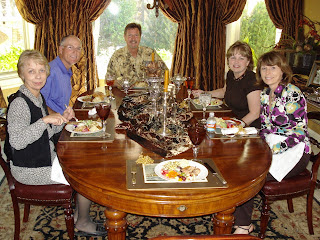 [large picture] [super size]
(February 24)
Here we have some of Mrs. Jim's Sunday school class small group eating a nice Sunday lunch at one of the member couple's home.
We got to sit in their nice dining room.
.
.
. 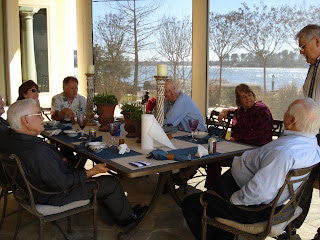 [large picture] [super size]
(February 24)
The other part were eating out here on the back porch. This couple lives on the lake, you can see the bigger (of two) islands we have. There are still lots for sale on this island if any of you want to move down here. 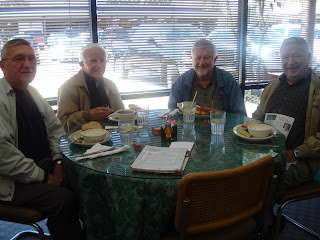 [large picture] [super size]
(February 27)
Here we have us three teachers and the department chairperson for our Sunday school class.
We met at the Garden Cafe in Conroe for a planning meeting.
Would you guess I'm the youngest here?
Left to right, a retired Baptist missionary, a corporation CEO and founder, me (education, college professor), and a cardiovascular surgeon. All of are retired. 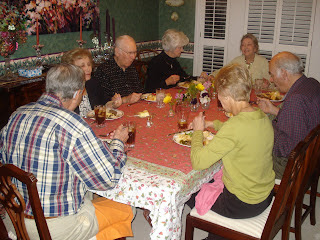 [large picture] [super size]
(March 3)
Now the fun bunch. We meet at homes with this group and another once a month to play the domino game, 42 (link).
Until we retired we did not know how to play 42, even though it is the Number One Texas table game.
Again, all of us are retired.

We had a happy Sunday -- The Jim Bunch eats again, then we went to the City of Houston Herman Park for a while 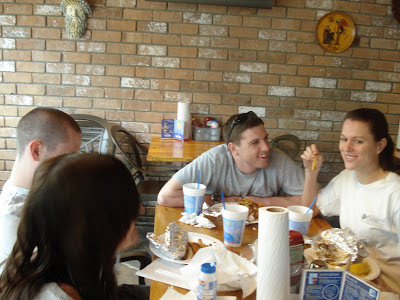 Son Tim e-mailed the Jim Bunch last week to have a get-together at Niko Niko's Greek Restaurant. Megan was coming home from Austin. She is graduating from the University of Texas this May with a Masters Degree in Accounting.

At the end here, are Megan and her boy friend, James. We all like James. 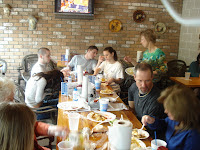 Here we have the Jim Bunch, mostly candid this time. Sorry guy, if you weren't looking at the camera.
. 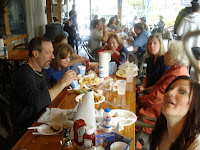 Missing were grandkids, Tim and Renee (live out of town) and BP (she had other places to be), then kids Karen, Billy, Mitch, Carmen, and Mike. A couple of kids were working, three were playing golf.
. 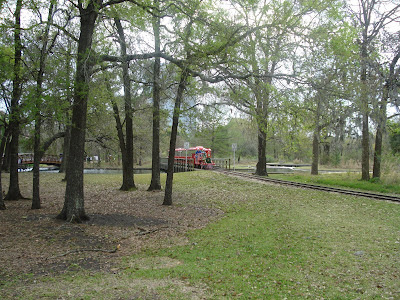 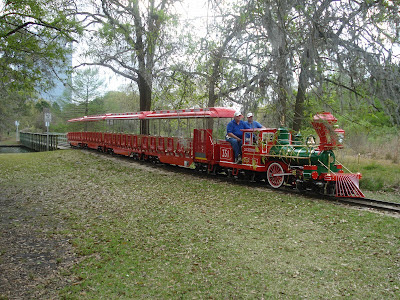 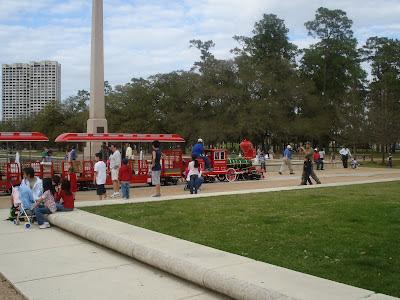 Everyone is proud of the new Herman Park Train. We haven't ridden this one but sure did ride the other one, a lot. Kids and grandkids all liked it when they were young. Mrs. Jim and BP rode that old one just this winter. 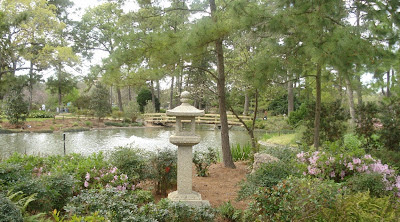 The Herman Park has a really nice Japanese Garden too! We didn't get to stay long there because it closes at 5:00 PM until summer time. (link) 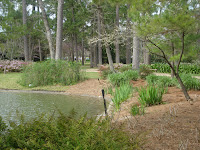 .
The bridge and pond above remind me of Monet's works at Giverny. Mrs. Jim and I want to go there before we get too old for things like that. 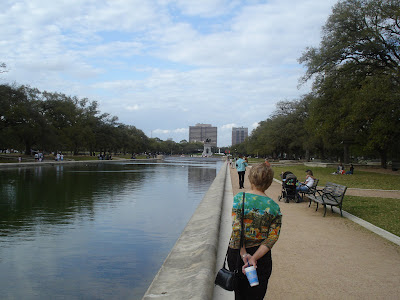 That's General/President Sam Houston at the end of the reflection pool. 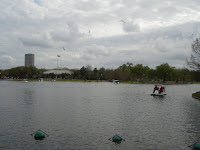 We didn't rent a paddle boat but you do that. 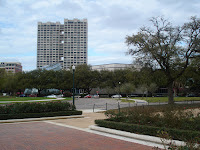 There is the Museum of Natural Science, the Cockrell Butterfly Center (link), a planetarium, and a very nice IMAX Theatre if you want to stay cool in the air conditioning. 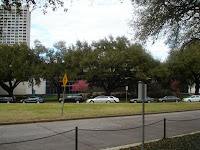 Walking to the Museum, we saw this orange flowering fruit tree in bloom (in the center of the picture). 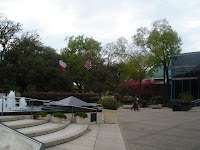 The steps here are in front of the Museum. They lead to a huge sun dial where there are always a bunch of kids playing something similar to hopscotch among the numbers.

What we didn't see were the 4500 animal Houston Zoo (at Herman Park)(you gotta see this link to the zoo and all other attractions at Herman Park, the Miller Outdoor Theatre, and the 18-hole Herman Park Golf Course (click here for a free round of golf).

All three of these are Houston Texas size, that means real big(!!). If you haven't been there, please visit the Wikipedia article, you will be impressed. Come visit us and I promise we can go there! 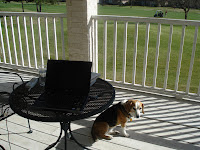 Yesterday (Saturday) I was on the computer a lot. First I had to finish my Sunday school lesson for tomorrow. It is all about Jacob and his trouble getting his wife, Rachel. Did you know that he had to marry her sister, Leah, first. After working for seven years for their uncle thinking it was to earn Rachel. So then he had to work seven more years to earn Rachel.

Did you have a problem with "their uncle?" Yes, that is correct, Jacob and his wives were cousins. Read all about it in Genesis 29-31, click here.

Mrs. Jim and our friend visiting from Maine were shopping. While they were out, I shopped too! On eBay. I spent a lot more than Mrs. Jim did. And Adi? She was my helper again. Both of us would rather have been down off the balcony and hitting our golf ball along with this fellow.


Before Mrs. Jim left, we read the paper. A couple of great items caught my attention. First was the 'joke of the day,' "He had a photographic memory that was never developed."

Second item, this cartoon (click) showing the artist's conception of blogging before the Al Gore had invented the Internet. 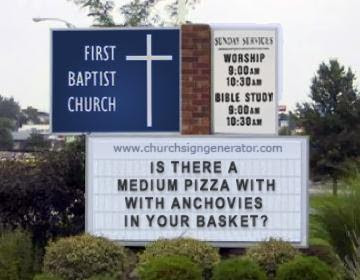 This sign reminded me of the little fellow who had loaves and fishes in his basket. It had been a long day, Jesus had been preaching longer than Billy Graham does that day. There was a huge crowd and everyone had gotten really hungry, but the only person with foresight to bring supper was this kid with his basket of loaves and fishes.

Jesus said to the kid, "Don't be greedy, pass your basket around!" That reminded me of the Methodist coffee house in Huntsville, Alabamah, I visited one day (in my hippy days a long time ago).

We all sat on the floor, around the room leaning on the walls. After a bit someone broke out a bottle of wine and they began passing them around till they were empty.

Those three bottles lasted us all night, somehow they never became empty. And there were twelve full bottles left over when we were ready to leave! Too bad we didn't have some pizza with anchovies in the basket also. That would have been good passed around going with the wine.

Oh well, just read about how Jesus did his thing to get enough bread and fish for the huge crowd, starting with just that one little basket. It's in Matthew 14:13-18

I would like to go to Orange, Texas. There is a new garden over there sitting on 252 Texas-sized acres, called the Shangri Law Botanical Gardens. I see I can't do that, because it is open Tuesday through Sunday. Unless they are having a dress rehearsal Monday. That is a long way to drive to find out I couldn't get in. I'd better pay bills and clean up around here, and play a little golf in the afternoon.
Links:
About Shangri La
Picture galleries

Well, I'm off to bed now. Be sure to set your clock ahead an hour or you may be late for church tomorrow. It sure seems early to go to bed but we have set our clocks ahead early!